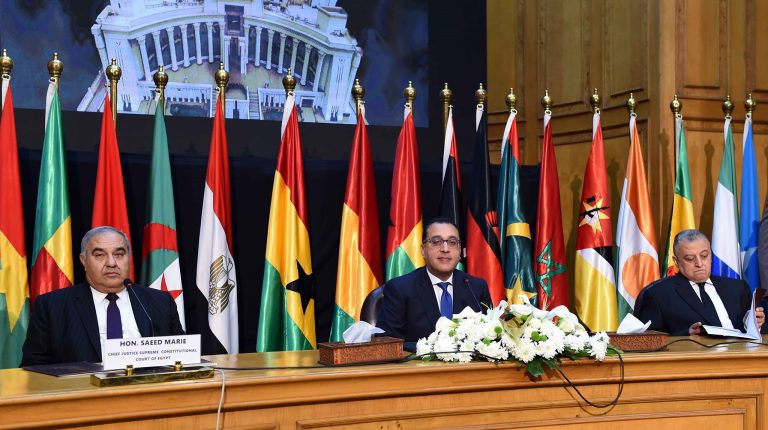 Prime Minister Mostafa Madbouly witnessed on Saturday the fourth high-level meeting of heads of African constitutional and supreme courts and constitutional councils in Cairo, where he praised the accomplishments of meeting in previous editions.

Madbouly said the meeting’s achievements aim to consolidate the frameworks of judicial cooperation between African countries. This would uphold the principles of justice, truth, and the rule of law sought by the peoples of the continent.

About 100 judges from 35 countries participated in the meeting to discuss mechanisms of constitutional interpretation, how to protect African rights, and challenges like terrorism from a constitutional perspective.

“I am confident in the continuation of the march of success and the increase in positives through the outcomes of the fourth meeting, based on my confidence in the distinguished experiences of the elite participants in this enlightening forum,” he said.

Madbouly stressed that he is confident that the spirit of challenge and perseverance is the bedrock of the fourth meeting, and he looks forward to reaping the desired fruits to secure his ultimate goal in achieving justice, sustainable development and peace in Africa.

The meeting is held under the auspices of President Abdel Fattah Al-Sisi.

President of Egypt’s Supreme Constitutional Court Sayed Marai said terrorism is one of the most important topics to be addressed in the forum.

“The meeting came as an initiative of the Court to reunite the higher judicial bodies that control the constitutionality of laws through a dialogue table on common legal and constitutional issues,” Marai added.

House of Representatives wronged, history would do it justice: Deputy Speaker of Soliman Wahdan