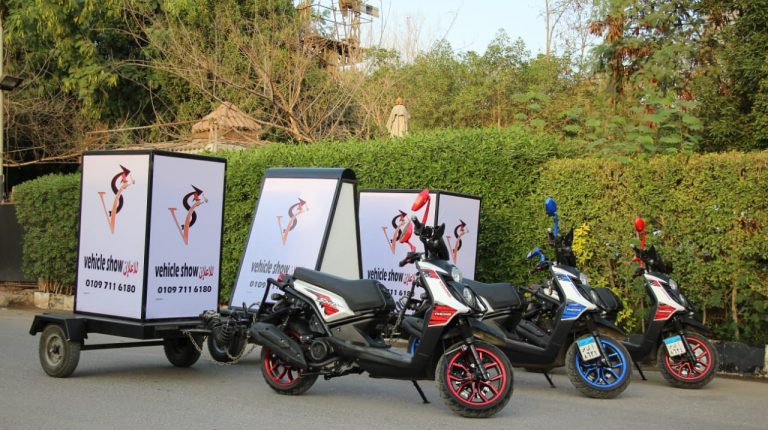 The Egyptian Vehicle Show company devised a new mobile advertising method, which depends on placing advertisements on a moving “scooter,” allowing companies to reach areas in a more cost effective and efficient way.

The company’s marketing executive, Mohamed Alaa, said that the idea of mobile advertising is applied in many cities such as London and Dubai, and is a new and eye-catching idea that ensures advertiser receive sufficient attention from the consumer.

He told Daily News Egypt that the units on which the advertisement is installed are licenced and can move anywhere in Egypt.

On the advantages of advertising compared to traditional outdoor ads, Alaa said that the idea of this sort of advertisement is new and innovative, making it a striking spectacle in the streets, which ensures that the public is attracted to the advertisement, grabbing more attention than traditional fixed ads.

He added that fixed advertisements can only stay in a fixed location, only reaching those that pass it. Meanwhile, the new solution moves around for 8 hours a day, reaching twice the number of potential customers.

He explained that fixed ads can only stay on major streets or square, but with the mobile units, ads can now reach the smaller streets and other hard to reach locations, allowing them to broaden their audience.

According to Alaa, the company was able to implement a number of advertising campaigns for a number of companies and achieved strong results.

Can Al-Qadi end the era of missed investment opportunities?

50 things that changed people's lives in a decade