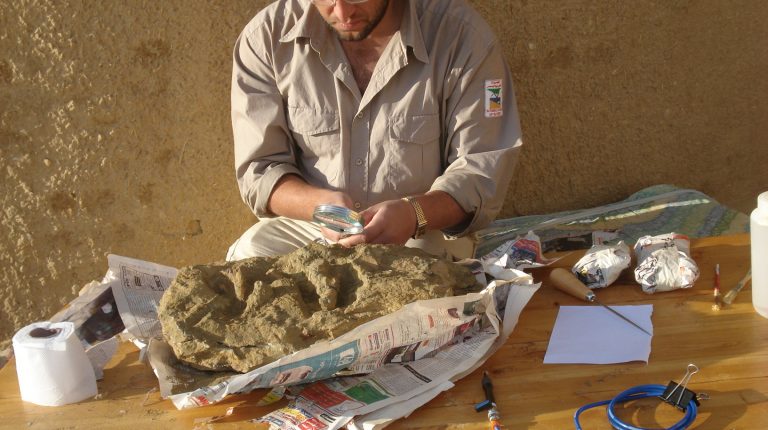 In early 2017, during a usual trip in the Wadi Al Hitan World Heritage Site in the Western Desert of Egypt, Mohammed Sameh, the manager of geology and fossils in the Nature Conservation Administration at the Ministry of Environment discovered a site of many pieces of fossils of an ancient whale.

About 37 years ago at the Fayoum desert, where the 200-square-kilometre Wadi Al-Hitan is located, was covered with water as part of the old Mediterranean Sea “Tethys Sea” which existed about 200 million years ago.

The Tethys Sea existed over Fayoum almost 200m years ago, before shrinking North and becoming the Mediterranean Sea and desertification turning the sea floor into a desert.

At first glance, Sameh thought that he had found the juniors of Basilosaurus isis, a genus of large, predatory whale, but after doing some research and consultation with other scientists, Sameh and his research team found that their new discovery was a new species and an important step in the evolution of whale locomotion.

According to a recent paper published in the open-access journal PLOS ONE, the uncovered fossils describe a new genus and species of protocetid named Aegicetus gehennae which was dated back to around 41m to 47m years ago.

Protocetids are a group of early whales known from the Eocene Epoch of Africa, Asia, and the Americas. While modern whales are fully aquatic and use their tails to propel themselves through the water, most protocetids are thought to have been semi-aquatic and swam mainly with their limbs.

The newly discovered creature appears to have been well-adapted for swimming through undulation of the mid-body and tail, similar to how crocodiles swim today, and is among the best-preserved ancient whales.

Philip Gingerich of the University of Michigan and the first author of the paper said that Aegicetus gehennae is a new Eocene-age fossil whale and the principal specimen of Aegicetus has an exceptionally complete skeleton of an animal 3.5 meters long that probably weighed about 900 kg when it was alive.

It is distinctive among early whales in retaining relatively large functional hind limbs, but the pelvis and hind limbs were no longer firmly connected to the vertebral column or backbone. Much of the vertebral column including the tail is elongated for a whale of this type, indicating that Aegicetus swam by some form of possibly eel-like mid-body through tail undulation,” Gingerich told Daily News Egypt.

The body shape of Aegicetus is similar to that of other ancient whales of its time, such as the famous Basilosaurus, however, the Basilosaurs isis was longer that Aegicetus, as it was an 15 metres long and 1.5 metric tonnes whale which was an apex predator and lived in the late Eocene, about  38m to 34m years ago.

“This paper documents a previously unknown protocetid whale, which is an early type of whale that is thought to be amphibious. Also, these findings represents the youngest ever discovery of a semi-aquatic early whale,” Mark D. Uhen, professor of palaeontology at George Mason University, US told DNE.

He further explained that findings of the paper help to document the transition of whales from fully terrestrial mammals to fully aquatic mammals.

From rock to lake