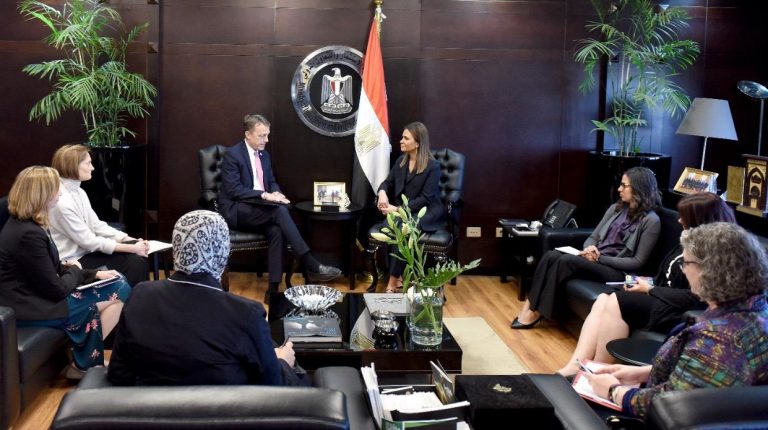 Egypt’s Minister of Investment and International Cooperation (MIIC) Sahar Nasr met with, Deputy Assistant Administrator for the Middle East region at the US Agency for International Development (USAID), Andrew Plitt, during his first visit to Egypt in his position where both sides agreed to boost their future cooperation.

The meeting was held in the presence of Sherry Carlin, USAID’s mission director in Egypt, and other staff of the MIIC and USAID, according to a statement of the MIIC on Monday, noting that the current portfolio of the USAID in Egypt is currently at the $1bn of bilateral agreements with special attention to small- and medium-sized enterprises and supporting private sector investments.

The U.S.’s investments in Egypt are at $22.8bn, the statement mentioned, noting that USAID along with the MIIC, encourage the American businesses to pump new investments in the Egyptian market.

U.S.-Egypt economic cooperation reflects the strength of the two countries’ partnership that takes into consideration the national priorities according to the economic and social reforms, Nasr said. She illustrated that the government’s priorities are to empower young people and women, in addition to supporting the small- and medium-sized enterprises, water and sanitation investments, in line with the expansion of social protection programmes.

For his part, Plitt praised Egypt’s economic reform programme and the measures taken to improve the investment climate, noting that the USAID is proud of its strong partnership with Egypt that will be even stronger after the Egyptian reforms and the business environment’s improvements.

USAID’s programmes in Egypt amount to over $30bn since 1978, according to the USAID’s website, noting that the agency has directly and fundamentally supported gains such as a reduction in infants and maternal mortality rates, improvement of reading ability in the early grades, and an increase in marketable skills.