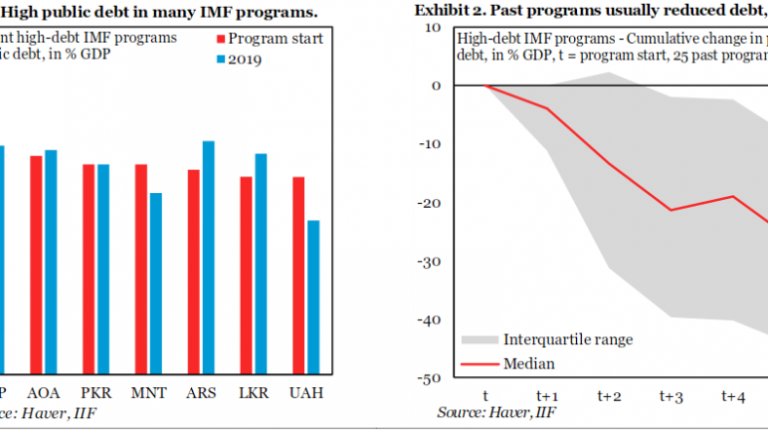 The recently completed IMF programme in Egypt reduced debt significantly, but not to completely safe levels, according to the Institute of International Finance (IIF) in its latest report.

The IIF works in a sample of 25 past IMF programmes in developed, emerging, and frontier markets that started with debt to GDP ratios above 75%.

It excluded programmes in low income countries where concessional loans were prevalent.

“We do not drop cases where programs went off track before completion and consider back to back programs as a single episode. The median programme achieved substantial debt reduction in five years,” the IIF explained.

However, according to the Central Bank of Egypt’s (CBE) monthly data reports,  domestic debt represents 79% of the country’s GDP in March 2019, compared to 85% in September 2016.

The CBE also showed that Egypt’s domestic debt recorded $4.204 tr by end of March, up from $2.758tr in September 2016, which is the last figure before implementing the programme.

In November 2016, the executive board of the IMF approved a $12bn loan as financial assistance to Egypt to support the Egyptian economic reform programme.

Egypt embarked on a bold economic reform programme that included the pound flotation, a reduction in fuel and electricity subsidies, imposing taxes including the value-added tax (VAT), all with the aim of trimming the budget deficit.

In light of this, the IIF report analyzes a sample of past high-debt programmes to see how successful they are at reducing debt.

The results showed that nearly every programme achieved some debt reduction. Declines were especially pronounced in cases where debt was restructured (two-thirds of the sample.

Out of the 25 IMF programmess in the study, the the IIF found that some programmes delivered modest debt reductions but just three saw debt increases including Jordon 2012, Portugal 2011, and Greece 2010.

otherwise,” according to the IIF.

“A review of past high-debt IMF programmes shows that public debt declines are the norm. Tight fiscal policy and growth generally help reduce debt. In many past programmess, debt restructuring was also part of the equation,” it asserted.

Concerning the economic growth rate in Egypt, the Minister of planning, Hala Al-Said declared earlier that it hiked from 3.4% in September 2016.

Meanwhile, Ahmed Kouchouk, vice minister of finance for fiscal policies and institutional reform announced that the primary indicators of the last FY showed a growth rate of 5.6%, which is one of the highest rates in the region, and the highest over the past nine years in Egypt, local Media reported.

IMF to approve $2.8bn for Egypt in next few weeks: IIF