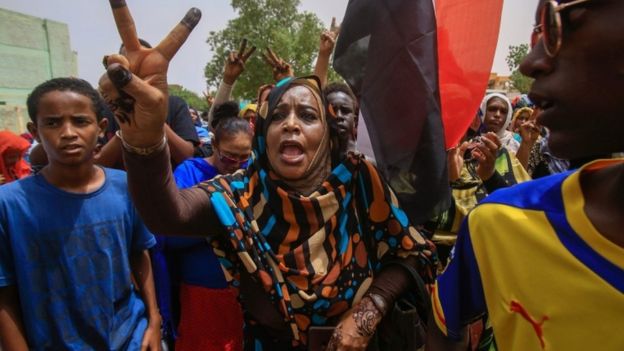 A Sudanese protester was shot dead, and several others were “severely wounded”, including a child, on Sunday during protests against the violence of Sudan’s rapid support forces (RSF) in Sennar, according to the Central Committee of Sudan Doctors (CCSD) and AFP.

The protest alliance, the Declaration of Freedom and Change Forces (DFCF) denounced the violence against protesters.

In a statement, the DFCF warned that these “bloody events,” could be transferred to a “real massacre.” The alliance called for justice for those who have been killed during protests demanding freedom and social justice.

Meanwhile, the alliance blamed authorities in Sennar and Khartoum for the violence and killing that occurred on Sunday.

According to AFP, demonstrators protested outside security and intelligence headquarters to protest against the RSF.

The DFCF and the Transitional Military Council (TMC) were supposed to meet on Sunday to discuss the points of contention in the constitutional declaration. However, the meeting was postponed.

Regardless, they already agreed on forming a sovereign council to lead the country for three years and three months.

Earlier on Saturday, thousands of Sudanese protesters swept the streets of several cities to commemorate the 40-day memory of the violent dispersal of a sit-in held outside the military headquarters in the capital, Khartoum, last May.

The protesters lit candles and demanded justice for those killed during the revolution and security forces’ crackdown against demonstrators.

In May, security forces violently dispersed the Khartoum sit-in, killing more than 100 protesters and injuring 500 others according to opposition figures. The military admitted dispersing the sit-in.

Some reports say that a number of bodies have been dumped in the river Nile.

The United Nations is considering an investigation into “the involvement of the RSF in rapes and gang rapes of protesters, women’s human rights defenders, and female medical personnel working in hospitals near the sit-ins.”