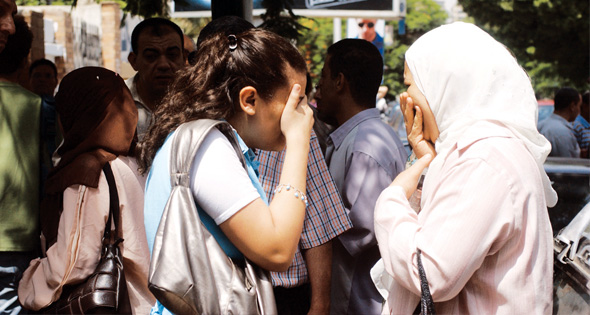 Across the country, worried parents spent the day waiting for their children to walk out of the exam halls, marking the first day of the first semester’s national exams of the third stage of high school (Thanaweya Amma), which began on Saturday.

As the exam season for Thanaweya Amma students ends on July 3, students still have a long way ahead of them.

The first exams which took place on Saturday were ‘Religious Education’ and ‘Arabic Language.’

Various sources claimed that the ‘Arabic Language’ exam was leaked. However, the education ministry denied those claims.

They explained in a statement that the exam sample circulation on social media was only a rumour and they also emphasised that students and families should not pay attention to these speculations.

Essentially, the ministry has a set list of rules and when it comes to circulating exams, students can be faced with serious repercussions.

As students are not allowed to possess a mobile or any electronic device during the exams (even if they are switched off), anyone who attempts to print, publish, broadcast, or circulate exams can face more than a year of imprisonment and a fine that is between EGP 10,000 and EGP 50,000 as well as being deprived of taking exams.

With respect to other potential issues that could arise, the ministry set hotlines to receive complaints which might occur during the exams period.

Earlier in May, students of the first secondary stage in most of the schools reported facing technical issues and poor internet connection during their exams. As exams concluded, the ministry said that 97% of students successfully concluded their tests.

In secondary school’s exams 36% of students got 90% or more: Shawky