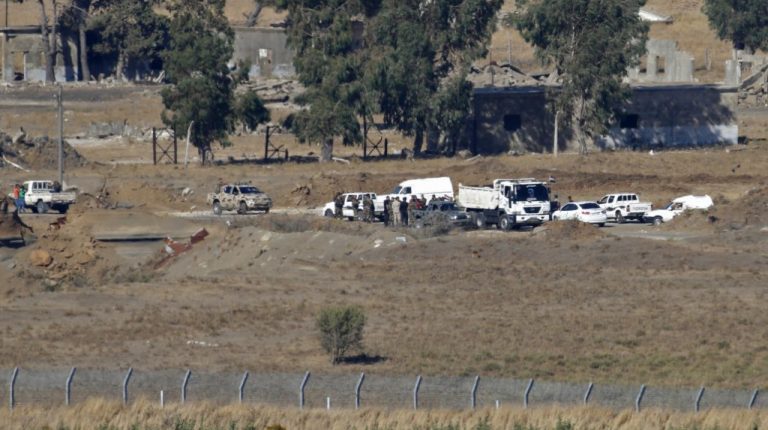 Israel said its aircrafts struck a number of Syrian military targets on Sunday after two rockets were fired at the occupied Golan Heights.

“Two rockets were launched from Syria to Israel, one landing within Israeli territory,” Israeli forces said in a statement.

“We hold the Syrian regime accountable and will firmly operate against any attempt to harm Israeli civilians,” Israel forces tweeted.

Three Syrian soldiers have been killed and seven others were wounded in the Israeli airstrikes near Damascus and Al-Qunaitra according to Syrian state media. Meanwhile, the Syrian Observatory for Human Rights stated that the targets were Iranian and Hezbollah sites.

Furthermore, the Syrian army said that its air defences responded to “aggressive airstrikes in Rif-Dimashq.”

Israeli Prime Minister Benjamin Netanyahu confirmed Sunday’s airstrikes, saying: “will never tolerate fire against our territories,” adding that Israel “will respond with great force to any aggression against it.”

Over the last few years, Israel launched dozens of strikes in Syria against suspected Iranian and Hezbollah weapons’ depots. Israel seeks to prevent any strategic Iranian military presence across Syria and to keep their forces away from the Golan armistice line.

The heaviest military operation was in May 2018 when Israel launched a large scale rocket attack on several Iranian infrastructure targets in Syria after Israeli forces said its frontline bases in the Golan Heights were fired at.

The Golan Heights is a rocky highland located in south-western Syria, which overlooks the upper Jordan river valley. During the 1967 Arab-Israeli War, Israel occupied around 1,200 sqkm of the Golan Heights from Syria. During the 1973 October War, Syria, under the rule of late President Hafez Al-Assad, tried to reclaim the Golan but failed.

Since capturing the Golan, Israel set up dozens of settlements. Up until today, there are thousands of Jewish settlers living in the Golan along with around 20,000 Syrians from the Druze sect.

Up to 2 million Syrians could flee to Turkey if clashes worsen: UN

Iran warns against any Gulf clashes,  threatens oil would surpass $100 per barrel