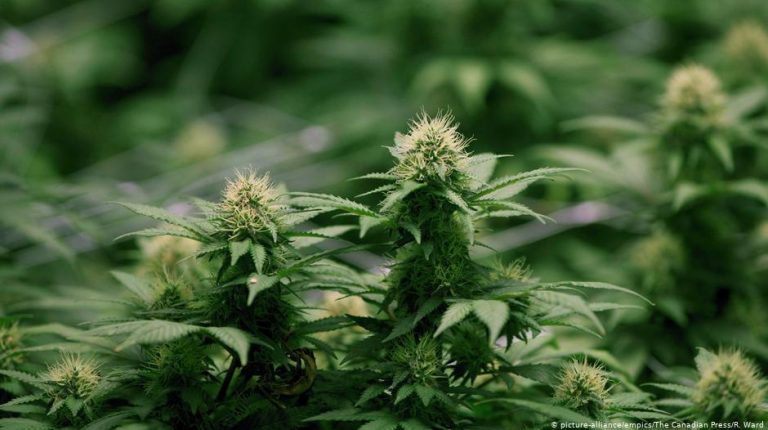 The use of medicinal cannabis has been allowed in Germany for two years now. But because domestic cultivation hasn’t gotten off the ground yet, the plant has been imported, mainly from Canada. That might change soon.As Europe's biggest cannabis investor conference kicks off in Berlin on Sunday, the most important topic will be the future cultivation of the plant in Germany, according to German Hemp Association (DHV) Chief Executive Georg Wurth. He finds it rather pathetic that there still is no cannabis cultivation in Europe's biggest economy.

For two years, Germany has allowed cannabis cultivation for medical purposes. But picking suitable growers hasn't been all plain sailing. A competitive tendering process had to be started from scratch following initial procedural errors. According to the Federal Institute for Drugs and Medical Devices (BfarM), there will be clarity in a couple of months as to which enterprises will get a license to produce cannabis at the behest of the state.

Frankfurt-based entrepreneur Niklas Kouperanis believes that is an unrealistic deadline. "I don't see any real progress in this matter over the next two years," he said. With a couple of investors on board, Kouperanis founded a startup called Farmako, which he said would focus on cannabis research, with financing for the project to come from the import and sale of cannabis flowers. "We want to make Europe less dependent when it comes to cultivating cannabis."

Farmako aims to produce medicinal cannabis in North Macedonia on a large scale and import it to Germany and other nations via Poland. When cannabis became accessible in Germany on prescription, Canadian companies were quick to conquer the market. A number of financially strong Canadian firms have since acquired many German startups active in this field.

While Canadians were at the forefront of exporting the plant, "they have failed to deliver to all regions in Europe, and Germany for that matter," said Kouperanis. Bottlenecks have also been reported by Georg Wurth. "At the moment, there's next to nothing coming in from Canada as companies there are preoccupied with their home market," he said. This is because since the middle of last year, Canadians have been allowed to consume cannabis for recreational purposes as well as medicinal, pushing up demand considerably.

Betting on the future

Talking about Europe, Kouperanis says there's a lot of potential. "We're only just starting." According to industry-affiliated research institute Prohibition Partners, the market for medicinal cannabis in Germany could swell to roughly €7.7 billion ($8.6 billion) by 2028, and for the whole of Europe to €58 billion.

Statutory health insurance providers in Germany reported revenues to the tune of some €70 million last year for products containing cannabis. By comparison, companies selling conventional pain killers in Germany logged revenues of €600 million in 2017. But if the cannabis market in Germany grows as fast as in other nations, there's potential for something much bigger.

In Canada, the plant's use for medical purposes was legalized in 2001 while in Israel it was as early as 1995, with cannabis for medical purposes in those countries used by roughly 1 percent of the population. That would be about 800,000 people in Germany. Patient numbers are not centrally registered in Germany, but 2018 estimates suggest there are currently between 30,000-70,000 cannabis-consuming patients in the country.

When will prices tumble?

Farmako's Niklas Kouperanis plans to get 50 tons of cannabis to the German market in the next four years. In 2018, pharmacies across Germany only received 3.13 tons in official cannabis flower supplies. The BfarM tender foresees around 10 tons in cannabis to be cultivated domestically over four years.

For patients whose health insurances do not cover the cost of any cannabis therapy, Farmako's activities could have a nice side effect. Right now, a gram of cannabis costs up to €26 at a pharmacy. "We could sell it for as low as €16 per gram," Kouperanis said.

The success of Farmako's import plans will hinge on when state-controlled cultivation of cannabis begins in Germany. Georg Wurth is confident that a first group of cannabis farmers can get going in a few months. "Had the process been quicker, Germany could have become a crucial location for the cannabis business," he said, adding the delays had only helped nations such as Portugal, Greece and North Macedonia push their domestic cultivation.

Kouperanis believes that Germany would not be a suitable cannabis grower anyway because of the country's high labor costs. That's why he didn't even apply for the tendering procedure, "because it wouldn't have made economic sense to me." However, imports will still be needed in large quantities even after cultivation starts in Germany.