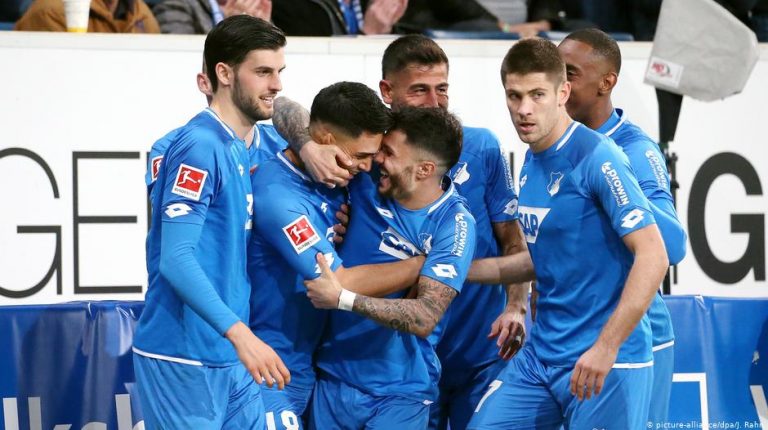 Julian Nagelsmann's habit of drawing games has returned again this season (Hoffenheim have 11 draws this season), but as the final stretch to the league campaign arrives another Nagelsmann trend emerges. The young coach's ability to take seemingly average talent and make them excel in a system continues to impress – and could turn draws into wins all over again.

Leverkusen came with Julian Brandt, Kai Havertz and Leon Bailey. The three flashed brilliance, notably when Julian Brandt assisted Leverkusen's only goal of the night with a delicious cross delivered from a static position, but were otherwise contained.

Instead, Ishak Belfodil, Joelinton and Andrej Kramaric delivered game-winning performances. Granted, Kramaric is a stand-out talent but that status is his alone in this Hoffenheim team. Joelinton returned from a loan spell in Austria and Belfodil was signed at the start of this season after an unremarkable spell at Werder Bremen. Individually this is not a terrifying team, but collectively this Hoffenheim side keeps being underestimated.

The strength of this team lies in it's ability to function as a unity. With that, comes a surprise surge in individual ability. "We used the space opened up by Leverkusen's aggressive defending to deliver superb counterattacks," Nagelsmann said after the game. "They did exactly what we trained – and added a few of their own ideas too… They deserved to beat a strong opponent."

This is a smart team. Belfodil's first goal came from vertical passing with Leverkusen in an advanced position. Kramaric's cross with the outside of his boot is the obvious piece of telling quality, but Belfodil's accurate finish should not go unnoticed. In midfield, Florian Grillitsch, another solid but unspectacular signing from Werder Bremen, looked extremely competent and the returning Benjamin Hübner also delivered a strong performance in the heart of a defensive unit that is run by former Cologne midfielder Kevin Vogt. They are not househould names, but they are making their head coach one by delivering his smart gameplan.

While Leverkusen were wilting late on, the fourth goal was superb. Hoffenheim won the ball and moved it forward quickly. Youth talent David Otto slipped in Belfodil, who was denied a hat trick by an opportunistic Kramaric. The move was slick, and required intelligence and quality to deliver.

Leverkusen were hampered by injuries forcing them into two changes, but Peter Bosz's ruthless persistence to defending so aggressively proved costly (and probably familiar for Borussia Dortmund fans). "If you defend like that in the second half, then the scoreline deserves to be what it is," Bosz said afterwards. "If it [the defense] is that open and the coordination isn't right, then it makes life easy for the opposition."

Clearly Leverkusen have the talent but in this game that counted for nothing against a Hoffenheim side well aware of what they needed to do to win. Grillitsch admitted his pass to Belfodil for the second goal was a bit fortunate, but it was played with the gameplan in mind. Belfodil's superb control and finish is a testament to that prepartion – and to how it can improve the individual's ability.

None of this is new. Nagelsmann has been doing this since he took over in 2016, and even though the results weren't there in their Champions League campaign this season, the brave and impressive performances were. The remarkable aspect is Nagelsmann's consistent ability to find players who perform in his system.

Last season, Hoffenheim collected 17 points from their final eight games. After tonight, they look ready to pick up something similar this time around. And who would bet against them?