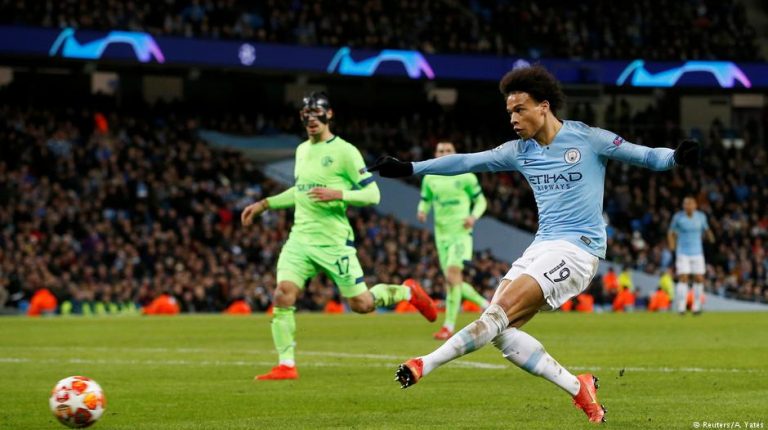 Schalke's hope of a Manchester miracle were not forthcoming as a rampant Pep Guardiola side marched into the Champions League quarterfinals, embarrassing the Bundesliga side on the way.

Domenico Tedesco set Schalke up to absorb City's attacks and, early on, it worked well enough. City enjoyed plenty of the ball but could do nothing more than hit the post when Sergio Aguero nearly turned home Raheem Sterling's low cross.

Right when it looked like Schalke had weathered the storm, City struck. Jeffrey Bruma was deemed to have pulled down Bernardo Silva in the box and referee Clement Turpin pointed to the spot, booked Bruma and, after appearing to check with the voice in his ear, confirmed the penalty that Aguero coolly dinked down the middle.

The goal changed the game, and appeared to break Schalke. Three minutes later, Aguero had a second after fine work from Sterling – a goal that was eventually awarded after a lengthy review from VAR to check whether Sterling was offside. Not long after that, Leroy Sané got in behind McKennie to fire into the far corner to end the contest.

Schalke's fans remained loud, cheering on their side but they proved to be the only winners from a German perspective on the night. Sané rounded Ralf Fährmann to score what he thought was the home side's fourth, but it proved not to be after another check with the VAR. City didn't have to wait long though. Sané's cross was turned home powerfully by Sterling, and stood despite also being reviewed by the VAR.

With plenty of time on the clock, Sané to set up two more. First, Bernardo Silva clipped a shot off the inside of the post before substitute Phil Foden (below) showed composure to finish off another great pass by Sané. Sadly for Schalke, that wasn't the last of it. Gabriel Jesus curled a seventh around Schalke's defense to complete the rout and embarrass Schalke.

Thankfully the referee blows full time on the game. A night Schalke will want to forget, and quickly.

84' "Shameful," says the commentator on our German television feed, and it's hard to disagree.

78' The City youngster piles on the misery for Schalke, and almost doubles his tally moments later but Fährmann palms clear.

71' Bernardo Silva sweeps home Sané's cross. The gulf in finances, in depth, in quality between the two clubs is all obvious and doesn't really need repeating. But is there any excuse for a Champions League team being 8-2 down on aggregate? At what point does personal and professional pride come into play for these Schalke players?

69' City's Zinchenko is booked for a foul on Embolo, who is subsequently replaced by Steven Skrzybski, who was playing in the second division for Union Berlin last season.

67' Just over 20 minutes to go, but at least the travelling supporters haven't given up.

59' It's already a hammering but this could get extremely ugly for Schalke and Domenico Tedesco. The game might be beyond them, but are the players willing to fight for their coach?

56' Another inexplicably long VAR delay but, eventually, Sterling is deemed to be onside from Sané's cross. Not only that, he's standing in yards of space with his markers, Ozcipka and Bruma, nowhere to be seen.

53' Sané rounds the goalkeeper and slots the ball home, BUT … here we go again with VAR … no goal! It remains 3-0.

51' Gündogan with a lovely chipped ball to play Sané through but the German, mercifully for Schalke, drags his shot wide.

50' From the resulting free-kick, Sané bicycle kicks Laporte in the shoulder, but the Frenchman goes down holding his face. Is there any need for that?

48' City's Danilo goes into the book for a challenge on Sané, and the Brazilian has bloodied his eye in the process.

46' And we're back underway in the second half! Schalke require four goals, which is one fewer than one of our DW colleagues thought. But who's counting?

HALF TIME: Schalke put out of their misery, for 15 minutes. This one is most definitely done. Not quite so much in the other game though, where Cristiano Ronaldo has halved Juventus' deficit against Atletico Madrid.

45+2' – Sterling plays a one–two and bursts in to the box but Fährmann palms the shot away.

43' – The floodgates are officially open and Sane has scored against his old club again. A lovely ball inside the fullback from Zinchenko sets the German away and he slams it home across the goal. They go to VAR despite Sane quite clearly being miles onside and the goal is given.

41' – Yep, goal. Though obviously that rigmarole made it less fun for everyone.

40' – This is a farce. They are checking if Sterling is onside, a relatively clear cut decision but it's taking minutes. He's onside, just but onside.

38' – A brilliant lofted ball, again, from Gündogan finds Sterling on the right. He backheels to Aguero, who forces it home at the front post. But they're checking VAR.

37' – A similarly lovely ball from Gündogan over the top to Aguero. A couple of Schalke defenders get back but he digs out a shot. Fährmann holds. Then SCHALKE HAVE A SHOT. Stambouli wins it in midfield, drives forward but drags wide.

35' – GOAL! Manchester City 1 – 0 Schalke After a (relatively) short VAR check and a re-spot of the ball, Aguero allows Fährmann to go to ground and dinks it down the middle. Textbook Panenka from the City striker.

32' – PENALTY TO MANCHESTER CITY! Gündogan lifts one in to Bernardo, who is running off the back of Bruma. The Schalke man puts his arm out to stop his opponent and the referee points to the spot.

30' – Stambouli, extravagantly masked, is late on David Silva, giving City a free kick on the left hand side. Gündogan passes to Zinchenko who floats it to Aguero beyond the back post in space. But he can't generate any real power and it flops in to Fährmann's arms.

28' – Tedesco will be pleased by how Schalke have kept their shape, they are making City work for it. Though he'll also be aware that at some point they'll have to ask some questions of their own.

24' – A decent little spell of Schalke possession ends when McKennie's ambitious crossfield ball is cut out by Sterling. For all that City have dominated the ball, they have only really cut Schalke open once.

21' – The corner is cleared and the ball recycled. Schalke think they should have another but the referee disagrees. Still, some territory for the German side, at least.

20' – Embolo does really well, chasing a lost cause to pressure Laporte into giving away a throw and get Schalke up the field for about the first time. Eventually Oczipka wins a corner on the overlap.

18' – City have had 73 percent of the ball so far, it feels like more. It also feels like only a matter of time.

14' – CHANCE! Aguero so close to opening the scoring. Walker plays a brilliant ball inside Oczipka as Sterling flies on the outside. The Englishman whizzes in to the box, commits the keeper and squares to Aguero. The striker is just beyond the front post and hits the upright under challenge from Stambouli. It wasn't quite an open goal, but pretty close.

10' – Some strong pressing from Schalke, something they did well in the first leg, but Burgstaller wastes the ball when he gets it. They need to look after that ball when they have it, because they're not going to get all that much of it.

8' – The Schalke fans are bouncing merrily along and making all the noise but their team are chasing shadows a little at the minute, City dominating the early possession.

4' – City take a corner short and it breaks down badly. Konoplyanka drives upfield and tries to find Embolo but Danilo just gets a head to it. Sloppy from the hosts.

3' – Sterling jinks away down the right and fires a cross in to Fährmann's hands. It looks, in the early stages, like it's Danilo at center back for City.

1' – Sergio Aguero knocks it back to Gündogan to get us underway.

20:55 – The time for talking is nearly over. You sense that Schalke will need to weather an early storm against Pep Guardiola's men if they're to stand any sort of chance tonight.

20:45 – The players are out warming up on the pitch and the camera soon focuses on Raheem Sterling. The English winger scored the winner in the first leg and is fresh from a hat-trick against Watford on Saturday. Bastian Oczipka is going to have some job containing him.

20:35 – Tedesco talks. The Schalke coach is in positive mood ahead of this one. “I don’t see it as pressure. It’s an honour to be here, 33 years old, but it’s not about me. It’s about Schalke… we want to cause a surprise."

20:30 – After the bleak outlook of my last entry, here's a stat offering a sliver of hope to Schalke fans. Or, at least some good memories.

20:25 – The visitors will need to score at least twice tonight and it's hard to see – short of Bentaleb's penalties – where they get them. The return of Embolo is a boost but his total of five goals all season is the second highest after Bentaleb's eight and they're averaged just 1.08 goals per game in the Bundesliga.

20:15 – The Etihad isn't always the noisiest of stadiums, especially when the home fans expect City to roll their opponents over. But the away end is going to make some racket, judging by this video.

20:05 – Schalke announce team. And here's the Schalke line up. Breel Embolo starts again after a brace in Schalke's Friday night loss to Werder Bremen, which also saw Daniel Caligiuri injured. Matija Nastasic, who used to play for City, bruised a foot just before the game while Sebastian Rudy and former Manchester City youth player Rabbi Matondo both start on the bench. Nabil Bentaleb will hope to add to his eight goals from the penalty spot tonight. Anyone for a bit of VAR?

19:50 – City's team is in. The headline nes is probably that John Stones is fit enough only for the bench, so it looks like Danilo will play at center back alongside Aymeric Laporte. With midfield fulcrum Fernandinho also missing, City may be a little susceptible defensively. If Schalke can get the ball. Leroy Sane starts against his old club, with Raheem Sterling the other side of Sergio Aguero.

19:40 – The stats don’t make pretty reading for Schalke, but then no-one had ever turned around a 2-0 home loss in the first leg until United last week, and that was in 106 attempts.

19:30 – Hello, and welcome to the second of three Bundesliga vs. Premier League clashes in the last 16 of this year's Champions League.

Of all of them, this one looked the biggest mismatch when the draw was made in December, but Schalke led the first leg in Gelsenkirchen until a stunning Leroy Sane free kick in the 85th minute and a late Raheem Sterling goal gave City a 3-2 advantage.

The two teams are in contrasting form, with City having won nine straight games and Schalke in free fall, but given what happened with Manchester United and Ajax last week, you can't rule anything out.