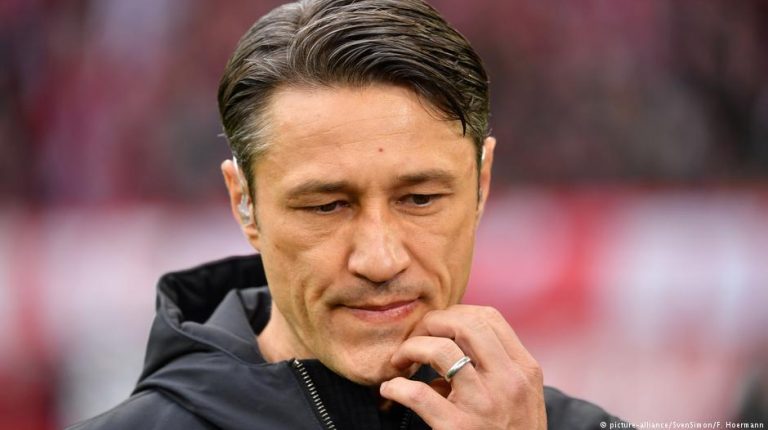 Bayern Munich’s coach Niko Kovac is facing a tough week in the Bundesliga and the Champions League. How well his team performs against Wolfsburg and Liverpool could go a long way to deciding his future.Niko Kovac was a frustrated figure on the touchline at the Allianz Arena towards the end of November.

His team had let a three-goal lead slip to recently promoted Fortuna Düsseldorf. His apparently mutinous dressing room was leaking stories to the press. Bayern Munich's title defense was said to be over and debate was swirling about whether or not he should be sacked.

Fast forward four months and the mood at the Bavarian giants is much improved. Four wins on the bounce have pulled them level on points at the top of Bundesliga table with Borussia Dortmund, and Kovac masterminded a way to stifle Liverpool in the first leg of their Champions League tie.

After all of the ups and downs during his first season in charge, Kovac has the biggest week of his Bayern tenure ahead of him. If his team can overhaul Dortmund at the top of Bundesliga on Saturday and get past Liverpool in Wednesday's second leg, many may consider Bayern's season back on track.

However, a slip up against Wolfsburg and an elimination in the Champions League last 16 for the first time since 2011, and questions about how long the former Bayern player can keep his job will quickly resurface.

Kovac hasn't exactly had the most ideal week to prepare for the challenge. On Tuesday, Germany coach Joachim Löw rocked up in Munich to tell stars Jerome Boateng, Mats Hummels and Thomas Müller they were dropped from the national side.

All three players have openly vented their frustration at the way they were told on social media, and the club expressed its irritation at the timing of the announcement before a crucial week. Kovac himself was critical of the decision.

"To be called an old hand at 29 or 30 with such finality, it's just not right," he told the media. He challenged the trio to prove they are still good enough to play for the national team.

Added to that distraction is the surprising strength of their upcoming opponents. Wolfsburg are exceeding all expectations in the league this season. They currently sit in seventh place, have not lost a game since January and, like Bayern, managed to roll over the impressive Borussia Mönchengladbach at home.

It's a tough stretch in March that could well determine whether Kovac is cut out to lead the Bavarians in the long-term.

Borussia Dortmund dominated their Champions League tie against Tottenham Hotspur but still ran out 0-1 losers. The result leaves the club with only one win in the last eight games. Worryingly, joint top-scorer Paco Alcacer's goals have completely dried up. Dortmund will be desperate to get their season back on track, and Alcacer back on the scoresheet at home to Stuttgart.
Another team desperate for a win is Schalke. The Royal Blues are in free-fall, having failed to win since their first game of 2019. Their last outing saw them hammered 0-4 by Fortuna Düsseldorf. Unfortunately for Schalke, opponents Werder Bremen have not lost a game this year. Their tough run looks likely to continue.
Only Bayern Munich can match Hoffenheim for the number of shots they have had this season. Both clubs' totals stand at 415. Sadly for Hoffenheim, nine fewer of those shots have ended up in the back of the net. But bottom club Nuremberg can expect a bombardment this weekend.