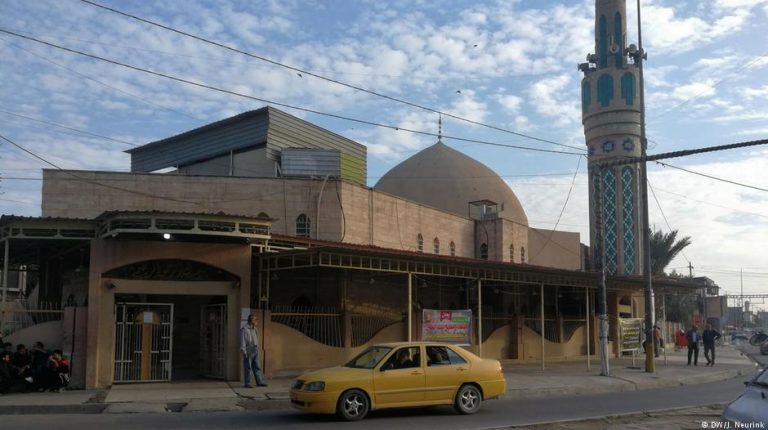 During the IS occupation of Iraq’s Mosul, sessions were held in secret for women to exorcize demons. IS had banned religious practices as black magic. DW’s Judit Neurink set out to find out more."Women still come asking for the exorcism sessions," says Othman, the muezzin who five times a day calls the faithful to pray at the Haiba Khatoon Mosque in the center of Mosul. He did the same during the three years Iraq's second city was occupied by IS, and recalls how women would flock to the mosque for the sessions held especially for them to evict djinns, as the Quran calls demons or supernatural creatures.

Othman is sitting in the mosque's gardens, where men are performing their prayers. This busy mosque, near the University of Mosul, is used a lot by traders, students and travelers who miss one of the set prayer times.

It seems too busy a place for demon eviction sessions to have been held there, which hardly anyone knew about. Imams who returned to their mosques after IS left deny any knowledge of the practice anywhere during the occupation. "Most people in Mosul had no idea what was going on here," Othman told DW. "Perhaps only those who regularly came to this mosque to pray." The sessions were held between the midday and 3 p.m. prayer sessions, and only in the women's section. "And the women only used the side entrance."

As a muezzin during the IS period, and fearing repercussions, Othman is reluctant to provide his family name. But since he had to enter it five time a day for the call, he had a key to the mosque and saw dozens of foreign and local women who turned up regularly for the sessions.

One of the documented cases was that of a young Dutch woman who lived with her IS husband and two children just around the corner in a house they shared with another IS couple. The house is still standing, and its original owners have returned.

Laura H. (whose last name is protected under Dutch law), spoke to Dutch writer Thomas Rueb about the experience. Rueb went on to write a book about it, which was published last year. She went to the sessions, known as rukyah in Islam, because she said her husband had molested her, and she sought the cause for his behavior within herself. Djinns were blocking her faith, which is why she was making mistakes, she was told.

She said she saw women take off their gloves and sit in a small room with their palms upturned. She witnessed how they would all close their eyes and the man leading the session would start to chant texts from the Quran in a strange, high-pitched voice, gradually getting louder and louder. How he would hit the women on the palms of their hands — a scandal according to IS rules prohibiting all physical contact between men and women who are not married or related.

Read more: Is the 'Islamic State' making a comeback in Iraq?

She recounts how a young woman fell into a trance and pulled off her scarf — another taboo. Then how the women would start to vomit and fall to the floor as if they had lost control of their muscles. How they screamed, cried and laughed. When the session ended after some 20 minutes, the women rearranged their clothes and went outside in silence.

The man who led the sessions was Abu Younis, a 55-year-old tailor with no Islamic education, Othman says. Younis had no ties to IS either, but because of his popularity, the terror group allowed him to conduct the rukyah in the mosque. This is quite extraordinary, as the group had deemed many other religious practices as shirk, or idolatry. It had forbidden the sales of amulets with Quranic texts and even executed those who offered services of this kind for using black magic.

Did IS turn a blind eye?

Before IS, these had been common practices for Sunnis in Mosul and elsewhere in Iraq. For women who desperately wanted a son, or others with illnesses that would not clear up, a visit to an imam or holy man for an amulet and a prayer would be called for. Others would pray at the graves of saints. According to witnesses in Mosul, exorcising sessions for djinns were also common, especially among Sufis. But Sufism, a branch of Sunni Islam that is more open to the occult, was forbidden by IS, as were all other faiths and customs that were not in line with the terror group's Salafi interpretation of Islam.

And yet the exorcism of djinns was accepted. That is because they are part of the Quran, says Jamal Hussen, an expert and writer on Salafi Islam from Iraqi Kurdistan. "According to the Salafi doctrine, women are more susceptible to a devilish djinn, because their perceived weakness and lack of intelligence are an invitation for the devil." Perhaps that is why the eviction sessions only seem to have been attended by women; there is no mention anywhere of sessions being held for men during the occupation.

In the Quran, djinns are a third kind of life, along with humans and angels. The latter are God's messengers and created from light. Djinns are spirits created from a flame, Hussen says, and disguised from human senses. They can be both good and evil, and share some habits with humans, like getting married and having children. "There is a complete Surah in the Quran about djinns," he says, and that is why they are part of the faith of Salafi groups like IS. During the war in Syria, the terror group repeatedly stated that they had angels and djinns fighting on their side against the unbelievers.

Conventional medicine would probably diagnose the symptoms of someone who is said to have been taken over by djinns as a psychological illness. But in place of medical treatment, Salafis subject the patient to sessions in which verses of the Quran are read and the djinn is ordered to leave the body. "Often, the patient will hallucinate, or may suffer epileptic fits that can sometimes even lead to death. But then it is said that this is because the djinn refused to leave the body."

The exorcism should be conducted by a man, preferably old and known for his faith, Hussein says, but he admits it is strange that, in societies in which the male and female worlds are as strictly separated as they were under IS, a man should have led the sessions for women at the Haiba Khatoon Mosque. "It is known for men to have abused the situation and harassed the women," he says. That is why some of the elders of Al-Azhar, the most influential religious university for Sunni Islam in Cairo, have said "this method is nothing but trickery and corrupt."

After IS left, Abu Younis was picked up by the Iraqi army, Othman says initially, only to contradict himself saying the man cannot be contacted as he has gone underground. Over a year after IS fighters were driven out of Mosul, there are still requests from women for exorcism sessions which would imply that Salafi women are still present in the city. But the Haiba Khatoon Mosque will not be providing them with what they want any time soon.