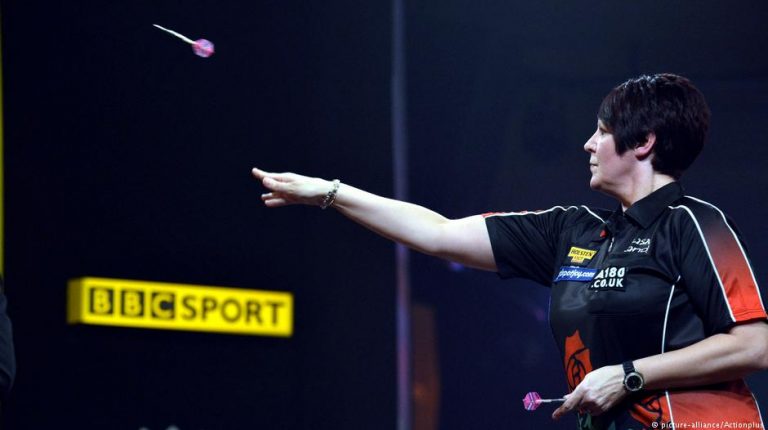 It’s extremely rare for women to be allowed to compete with men in professional sports. However, for the first time, two places have been reserved for women at the World Professional Darts Championship.Lisa Ashton (picture above) and Anastasia Dobromyslova will be among the 96 players involved when the annual PDC World Championship opens this Thursday in London's Alexandra Palace, known popularly known as "Ally Pally."

"We haven't done it to look good," Barry Hearn, chairman of the Professional Darts Corporation (PDC) said of the decision to reserve two places for women in what until now had been a solely male arena.

"There should be no restrictions in a sport based on ability. We'll get to find out how good they are and some of these girls can really play."

"We live in a time of change," added Hearn, who has set out to reform the World Championship to make it less of a testosterone-charged event than it has traditionally been. That's why you won't see any scantily clad "walk-on girls" accompanying the players onto the Ally Pally stage at this year's event.

The two players who are set to make darts history, Lisa Ashton of England and 34-year-old Anastasia Dobromyslova of Russia, are both multiple world champions in the women's game. The 48-year-old Ashton, the current women's world champion, has won the title four times, while Dobromyslova has won it three times.

However, while this is the first time that two spaces have been reserved for women, this won't be the first time that a woman has competed in the PDC World Championship. In 2009, Dobromyslova became the second woman to do so – after Canada's Gayl King in 2001. Both had been granted "wild cards" by the PDC. Still, competing against the men is far from old hat for the Russian.

"Personally I'm a bit worried as you never know how you'll be received and what you can do on the stage," said Dobromyslova, who hasn't had her best year in the women's game. "I know I played before but it was nearly 10 years ago so it's like starting all over again."

Ashton, on the other hand, has had a great year, having won her ninth women's tournament of 2018 just last weekend. Ashton conceded that when she takes to the stage on Thursday, it will be completely different though.

"I'm excited because it's the opportunity of a lifetime, a bit nervous because it's a lot different to what I'm used to, but I'm just really excited to get up there and enjoy it," the Bolton native said.

Ashton has been drawn against Jan Dekker, a two-time semifinalist in the BDO World Darts Championship in the first round.

"It's going to be really hard," the 28-year-old Dutchman said of his opening match. "It's a game in which I only stand to lose."

Dekker will remember the ribbing his compatriot, Vincent van der Voort, got from some of the other male players after he was defeated by Dobromyslova at the 2009 Grand Slam of Darts in Wolverhampton.

Dobromyslova isn't in action in the Ally Pally until Monday, when she faces 33-year-old Englishman Ryan Joyce.

Just over a year ago, the 2014 and 2017 world champion, Michael van Gerwen was asked via Twitter whether he thought there would ever be a woman player who could compete with the top men. His curt response: "No."

Since then, though the 29-year-old Dutchman, who is regarded as one of the favorites to take this year's title, seems to have tempered his view slightly.

"Why wouldn't a woman be as good as a man? I wouldn't like to lose to a woman, but I don't like losing to anyone," he said recently.

Whoever wins the final at Ally Pally on January 1 will go home with a handsome £500,000 (€550,000, $633,000) in their pocket. By comparison, Lisa Ashton earned just £12,000 when she beat Anastasia Dobromyslova to win the BDO World Darts Championship last January – which is the same fee you get for winning a first-round match in Ally Pally this year.

And PDC Chairman Hearn will be more than happy to see either or both of the women go home with some cash in their pockets.

"The men that play the women in the World Championship this year are under the cosh," PDC chairman Hearn said. "I don't want to wish them bad, but if I put my commercial hat on, it would be an amazing result to see a woman beat a man on the Ally Pally stage. It would say to all these women out there that if you dedicate yourself there is a route to the top."

Bolton makes US troops withdrawal from Syria conditional on IS downfall, Kurds’ safety

World Championship on land of achievements