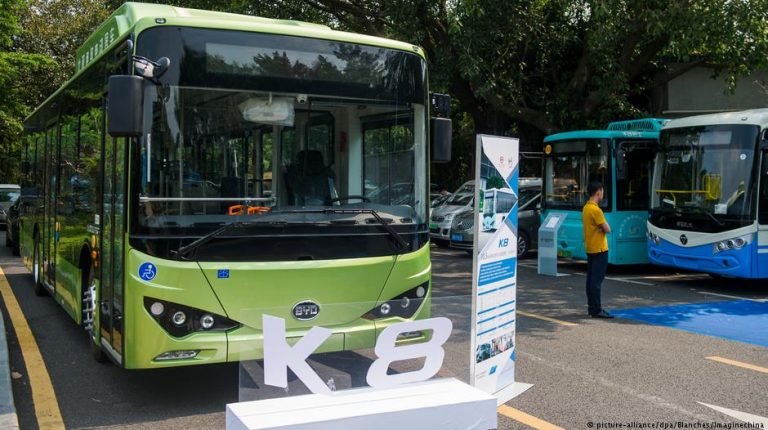 Cities such as Santiago de Chile and Cali in Colombia have started using electric buses. Others like San Jose, Costa Rica, and Panama City are in the middle of pilot projects to make transportation cleaner.A new fleet of 200 buses in Chile's capital, known as Third Millennium (Tercer Milenio), is to replace the current transportation system that was launched in 2007.

"We've said all along that a civilized nation needs a high-quality transport system that is safe, clean and sustainable," Chilean President Sebastian Pinera said while presenting the new buses in October.

"Our project aims to replace the notorious Transantiago."

The new Santiago fleet includes 490 diesel buses with the Euro 6 emission standard, the strictest one in place so far.

In Colombia, 125 electric buses were ordered for the city of Cali. It is the first bus fleet of this type in the whole country. In May 2019, 26 of them will start operating. The new buses will complement the MIO transport system (Masivo Integrado de Occidente).

The buses, which have eight battery packs, will have a maximum range of 240 kilometers (149 miles). According to MetroCali, the city's transport system, the buses have "regenerative" brakes, helping to recharge the batteries while breaking.

"We're kicking off the process of modernization that our system must undergo in the coming years to make bus fleets comply with zero-emissions policies," said MetroCali President Nicolas Orejuela.

In 2019, Costa Rica is to start a pilot project involving three electric buses that will commute between different cities. At the end of 2017, the country approved comprehensive electric transportation legislation and incentives to promote greener transportation.

Argentina for its part is about to implement its own one-year pilot project involving eight electric buses. The city of Buenos Aires launched a clean mobility plan (Plan de Movilidad Limpia) to reduce harmful emissions.

In August 2018, Panama City started running electric bus tests in the old city center. People can use the service free of charge for six months.

"If the current fleet of buses and taxis in 22 Latin American cities were replaced with electric vehicles right away, the region could save almost $64 billion (€65.2 billion) in fuel by 2030, emit 300 million tons of carbon dioxide less and save 36,500 people from premature death," a study by the International Automobile Federation (FIA) pointed out.

Latin America and the Caribbean "account for some 10 percent of global emissions of greenhouse gases and are among the regions with the greatest decarbonization potential," United Nations researchers added.