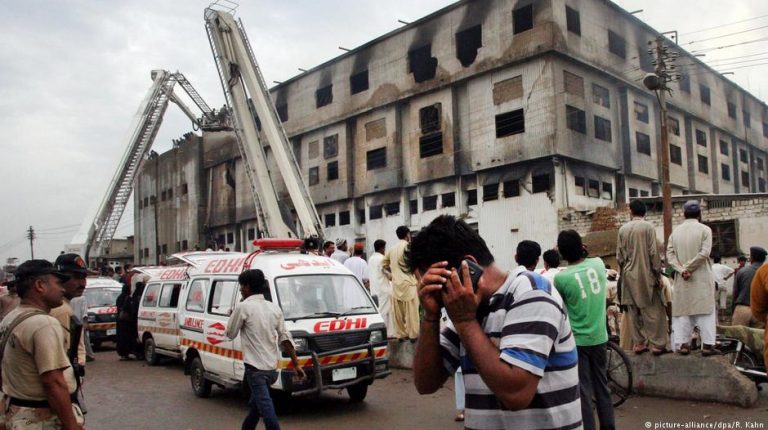 Can Germany’s clothing retailer KiK be held accountable for a fire that broke out in a Karachi firm in Pakistan in 2012? Here’s a timeline of the case that judges in Germany are dealing with right now.
On September 11, 2012, at 18:30 local time, a massive fire destroyed the Ali Enterprises in Baldia in Karachi, Pakistan, killing 260 workers and wounding 32.
KiK, a German clothing retail company was the factory's main customer.
The factory also housed two US and an Italian company.
Investigations said the casualties happened because the garment manufacturing facility was lacking in basic health and safety measures and had no labor standards compliance.
It is the first case of a German company, KiK (Kunde ist König, which in English translates as "Customer is King") being tried for damages for which its foreign supplier was liable. The plaintiffs accuse the German company and the local companies of being jointly responsible.
Only a few months after the disaster in Karachi, the Rana Plaza building collapsed in Dhaka (Bangladesh) killing over 1,100 workers. Both factories were closely involved in the supply chains for European and North American markets.
The court of Dortmund issued an initial decision in September last year, accepting jurisdiction over the case and granting legal aid to the claimants to cover costs.
On March 13, 2015, four people affected by the fire filed a case against KiK at the Dortmund court. They are seeking compensation and an apology from KiK.
On 30 August 2016, the court accepted jurisdiction and granted legal aid to the claimants.
On 10 September 2016, KiK agreed to pay a total of $5.15 million (€4.7 million) to the affected families and survivors following a negotiation overseen by the International Labour Organization. KiK claims to have voluntarily paid out $1 million in 2012 in emergency aid.
In January 2018, it was agreed that families of the victims would get monthly pensions from the amount provided by KiK, starting in February 2018.
In May 2018, the families of 209 victims of the Baldia Factory incident started receiving long-term compensation from the amount provided by KiK.
But Kik has refused to make compensation payments for injuries incurred, because it said it could not be held responsible for the fire. Legal adviser Joachim Jütte-Overmeyer said the fire was an act of arson caused by extortionists belonging to a powerful political party in the city, the MQM.
Another KiK lawyer Gunther Lehleiter said the statute of limitations was no later than September 12 2014 — months before the lawsuit against KiK was submitted.
Italian firm RINA is also on trial, accused of failing to visit the factory and that its Pakistani subsidiary RI&CA also failed to monitor conditions there.
Following the hearing in Germany, the Pakistani claimants traveled to Rome to meet the Italian National Contact Point (NCP) on the OECD Guidelines for multinational enterprises.