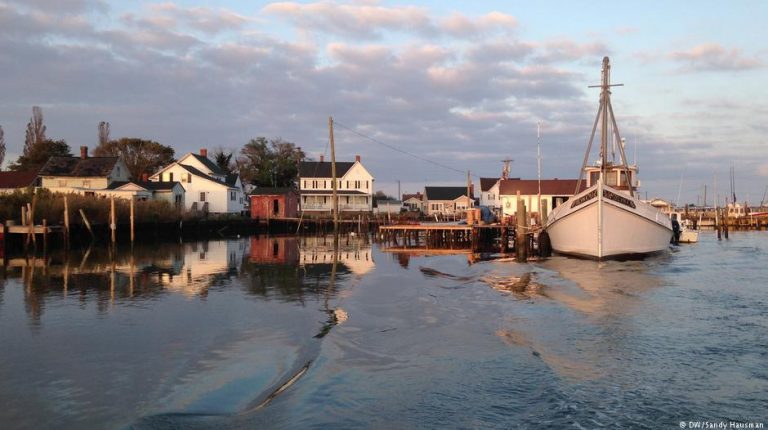 A small island in Chesapeake Bay is drowning due to erosion and rising sea levels, but most of its residents don’t believe in climate change. Instead, they hope US President Donald Trump will build a wall to save them.Tangier is a marshy island in the Chesapeake Bay — an estuary 90 miles (145 kilometers) south of Washington, D.C.. It takes an hour by boat to reach the 300-hectare (741-acre) island, and that distance has protected a unique culture for more than 240 years.

Fewer than 500 people live here, most of them deeply conservative Christians who speak with an accent heard nowhere else on earth. There is no cell phone service, and most people get around on foot, by bicycle or golf cart.

Tangier has survived hurricanes for centuries, and its residents have lived through epidemics, but scientists say they may soon be overwhelmed by water. Since the mid-1800's, Tangier has lost two-thirds of its land to the bay, and as you approach the island, its vulnerability is apparent. Four feet (1.2 meters) above sea level at its highest point, the buildings and trees along its shores seem to rise directly from the water. At high tide, it comes up from the sewers and the ground to flood streets and gardens.

Read more: Can coastal cities innovate their way out of sea level rise?

The United States Geological Survey points to sea level rise caused by climate change, and some scientists suggest the land may also be sinking, but the locals insist erosion alone is to blame.

"You can see that," says 60-year-old Mayor James Eskridge, "especially if we've had storms, but the sea level rise, we just don't see it happening."

Forty-year-old high school history teacher Dwayne Crockett agrees. He cites the Bible to support his belief that sea level rise is not a factor in Tangier's troubles.

After Noah and his animals survived on the ark, he says, "the Lord promised, 'Never again will I destroy the Earth with a flood!'" Crockett and Eskridge also recall playing in flooded streets and yards as children.

"Erosion has always been a major concern," Crockett explains. "I remember when I was a little boy, the western part of our island was washing away at an alarming rate, threatening our airstrip and sewage treatment plant. We finally got the state to build a sea wall to the west, and thank the Lord that stopped erosion of that area 100 percent."

More on this: Sea level rise is real and accelerating — PNAS study

And also: Sea level rising at triple speed since 1990

Trump to the rescue

Now, he and the mayor are crusading for a wall that would surround the island, and they have a surprising ally. CNN recently visited Tangier and interviewed Eskridge about the strong support local voters gave to President Donald Trump in the 2016 elections — more than 85 percent of them backed him.

"What would the mayor like to tell the president?" CNN wondered. "Tell him I love him like family," Eskridge replied.

Trump happened to see the story and wanted to speak with this ardent fan. "I was out crabbing at the time," Eskridge recalls. "It was a Monday morning, and my son came to get me. He said I needed to go home, because the president wanted to talk to me. I said, 'The president of what?'"

Eskridge suspected someone was playing a trick, but he was soon speaking directly with Trump, who made vague promises of assistance. Since then, Eskridge has met with three members of the Trump administration and hosted experts from the Army Corps of Engineers. He's also spoken with reporters from 22 countries, hoping to keep the plight of his island in the global spotlight.

"We're not just talking about a piece of land," Eskridge says. "We're talking about families, a community, a culture and a way of life. We produce a lot of seafood, and since World War I we've had a lot of folks serve in the military. They deemed us important people then, so I'm hoping we're still important."

"Let Tangier be your test," Crockett adds. "If you cannot save a small island with 450 people, then you're wasting your time on large cities like New York or Boston."

More on this: The world at 3 degrees: What it means for five cities

Animal lovers have also weighed in, arguing for the salvation of important habitat. "It's a wonderful area for wildlife," says Jim Gott, owner of the Bay View Inn. "This is a major stopping area for migratory birds and butterflies. The loss of the island would be devastating for them."

The state of Virginia recently agreed to build a simple stone sea wall to protect Tangier's harbor — a project that has been discussed for nearly 20 years. It's expected to cost just $3 million (€2.6 million), but the price of a sophisticated wall to surround the entire island would be much higher. The Army Corps of Engineers is asking for funds to do a study on what the true cost might be and whether it would actually work.

"The area has been subject to more frequent, intense storms," says Jill Bieri, a marine scientist with the Nature Conservancy. "Tangier is feeling the full effects of this."

She suggests protecting the island from damaging waves with man-made oyster reefs — underwater piles of concrete to which the bivalves attach, creating a natural barrier. Erosion might also be minimized by regrading shorelines and landscaping with salt-tolerant plants, or dredging sand from the bay and using it to build up the island.

That said, no one is sure if Tangier can be saved or for how long. "The rate of erosion is speeding up," Bieri says. "It has to do with sea level rise, and while I can't say whether a wall will or will not protect the island, I don't think in the long term anything man-made can protect us from what will happen naturally in coastal areas."

For now, residents are coping with more frequent floods. The start of school is often delayed, and innkeeper Maureen Gott says getting around can be a challenge. When she and her husband, Jim, first purchased their property seven years ago, they were not aware of how often they would contend with high waters.

"It depends on the moon: new moon, full moon, the wind direction, the speed of the wind. If there is a storm or not," she explains, and even when a hurricane misses the area, heavy rains in the region mean swollen rivers will empty into the Chesapeake Bay and cause problems for Tangier.

On a happier note, she adds that Tangier's uncertain future has prompted more tourists to visit. Alex Shtogren came from Baltimore for a weekend, intrigued by the island's old and unusual way of life. "I wanted to see it while it's still here," he confesses. "People are saying it's ground zero for climate change, so I felt like it was now or never."