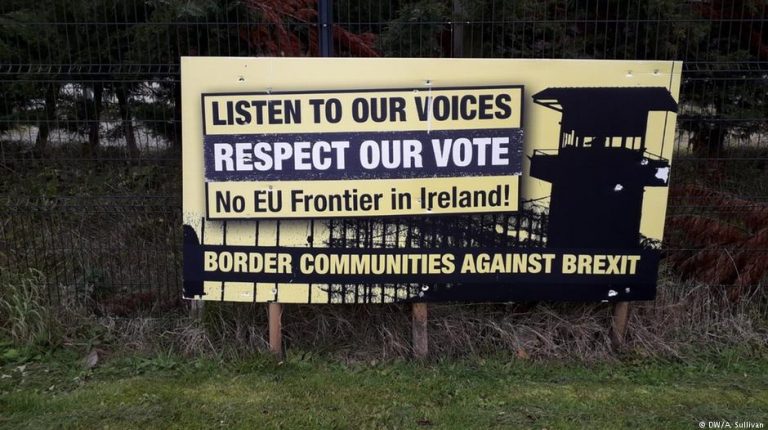 The Irish border has become the central sticking point in the EU-UK Brexit negotiations. For locals, the prospect of a hard border has brought memories of violence into sharper focus, Arthur Sullivan reports.The light is declining on an October evening in Clogher, County Tyrone, six miles (10 kilometers) from the Irish-Northern Irish border on the northern side. From the dimly lit hallway of his elegant farmhouse, Jack Johnston points towards a hill across the valley.

"There was a British Army camp up there. See, the big shed in the trees," he says, pointing to an innocuous-looking farm building. "There was one occasion when gunfire from the camp hit this house. The IRA [the Provisional Irish Republican Army, an outlawed paramilitary group] ambushed the camp from the corner of that field down there and set up rocket launchers at the wee corner of that lane. Then of course the soldiers and the regiment in the camp started firing back at them and a few stray bullets came all the way up and banged off our walls."

Read more: Past haunts Northern Ireland 20 years after the 'troubles'

Since the Good Friday Agreement of 1998, peace has held here. Stories about this once hostile region had largely disappeared from international news cycles, but the 2016 Brexit vote has brought it back into focus.

Depending on how the politics play out over the coming weeks, a hard border could return between Ireland and Northern Ireland — a future EU frontier. The stability of the peace process is part of the ongoing debate.

Johnson turns from his view across the valley. "We were living in a warzone, in a sense," he says, half surprised by the stark recollection of the world that once surrounded his idyllic home.

While peace has held, the politics are fraught. The past remains a source of great hurt and dispute. Arguments over flags and anthems often flare up. The Northern Irish Assembly, designed by the peace agreement to always be a joint constellation of Irish nationalists and British unionists, collapsed in January 2017. The region has been without a government since.

The Brexit vote contributed to its collapse and has polluted the politics here since. The EU, in support of the Irish government, insists that any final agreement must ensure no return to a hard border. However, the DUP — the most hardline unionist party — are committed Brexiteers.

The 310-mile border is like few others. Based on the ancient boundaries of six Irish counties, it runs in an erratic fashion as much along ditches, lanes, streams and fields as it does across main roads.

Its course is through predominantly rural terrain, and with more than 200 public roads that intersect it, it has significantly more official crossing points than exist on the EU's entire eastern frontier with the countries of Russia, Belarus, Ukraine and Moldova.

From the 1920s all the way up to 1993, customs checks were carried out on both sides of the border. Despite its elusive nature, it was more or less successfully sealed off by the British Army with the escalation of the "troubles" in the 1970s and throughout the 1980s.

At the height of the conflict an army presence of nearly 20,000 soldiers kept the multitude of crossing points under surveillance. Since the 1998 agreement, the border has all but disappeared.

Could customs posts become a target?

The town of Ballyconnell in County Cavan is a mile from the border on the southern side. Oliver Brady is from there and he remembers how the border became increasingly difficult to cross from the 1970s on.

He does not believe a return to violence is likely but he is worried about the possibility of a return to the border checks of the past, even if only limited to customs checks at first.

"Customs posts would be so symbolically objectionable that a certain element could try to attack and damage them and hassle the customs staff within," he said.

The "certain element" Brady refers to is the tiny minority of people in the border area and Northern Ireland as a whole who are still involved in some form of underground paramilitary activity.

Although paramilitary violence is very rare, a joint British-Irish report in 2015 found that all the main paramilitary groups in Northern Ireland, such as the IRA and the Ulster Volunteer Force (UVF) still existed.

"Customs posts can become a target," says Brady, who is a member of the Irish nationalist political party Sinn Fein. "If customs posts are going to be attacked, are they going to have to have a police presence to protect the target? That will mean the security presence will have to increase and then you have a real border again."

Twenty miles north, across the border in the town of Enniskillen, Tom Elliott, a former leader of the Ulster Unionist Party and an MP in the UK parliament up until 2017, does not share the same level of concern.

Although 56 percent of Northern Irish voters voted against Brexit — including even stronger numbers in Fermanagh, where Elliott lives — he remains a Brexit supporter and feels there is too much "scaremongering" around the issue. He believes that any border checks that exist after Brexit will be limited, and unlikely to lead to outbreaks of violence.

"I feel we are beyond that," he says, a view expressed by many in the town. "But my head tells me there are people who will see it as an excuse, although I think their support will be limited," he says, referring to paramilitary groups.

"Once Brexit happens, there will be no massive change to life here. People will still come north and do their shopping in Enniskillen and people from here will still go on holidays in Galway and Mayo."

Yet things are not always that simple. Jack Johnston is a northern Protestant, but says he has never been a unionist. He holds an Irish passport, the right of anyone from Northern Ireland, and his guiding passion is local history, not politics. Indeed, he holds a deep belief that local history can be an instrument of reconciliation between the different traditions on the island.

As for Brexit, he was very surprised by the vote to leave. He is confident that a compromise will be found to keep the border as open as it is today.

"It's a very easy border now, and it would be dreadful if that were to change," he says. "But I can't see it going back to the real hard border, with frontier posts, guns bristling and hooded men or men with blackened faces, be they IRA men or British soldiers.

"I think we have moved on from that. I think and I hope that we have learned from the lesson of the 'troubles' … that surely there is another way."