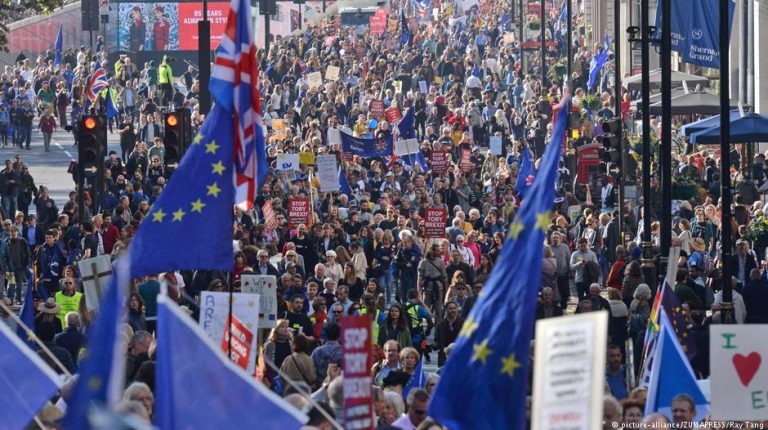 Organizers claimed 700,000 turned out in London, calling for a vote on the terms of the Brexit deal. Prime Minister Theresa May has repeatedly ruled out another referendum.Thousands of people marched through central London on Saturday to call for a second Brexit referendum.

Organizers and participants in the People's Vote March have expressed concerns that the UK's exit from the European Union looks nothing like the Brexit outlined ahead of the first vote in 2016.

The 2016 referendum was backed by 52 percent of voters, with just over 70 percent of 46.5 million registered voters taking part.

People calling for a second vote argue that while a small majority in 2016 did vote for Britain's exit from the 28-nation bloc, they did not vote on the terms of the separation. They claim that many people would have voted differently had they known the true costs involved in the split after 40 years of EU membership.

London Mayor Sadiq Khan, one of the politicians taking part in the Saturday march, said it was a "historic moment in our democracy."

There are concerns that the UK could crash out of the EU without a divorce deal amid infighting within Prime Minister Theresa May's divided Conservative government.

A no-deal Brexit could create chaos at the borders and in the economy.

May is, however, hopeful of negotiating a deal with the EU. The terms would probably have to be ratified by the British Parliament but the organizers of Saturday's march feel the people should be given the final say.

The lawmakers must "decide whether to make our country poorer, trash our vital public services and wreck the life chances of the young, or give us all a People's Vote on any Brexit deal," "People's Vote UK" said on their website.

Opinion polls suggest growing support for another referendum. But pollsters failed to gauge the mood of the voters ahead of the 2016 referendum when they indicated the remain campaign would win.

May has repeatedly ruled out a second referendum.

"They now want a second referendum to go back to the British people and say 'Oh, we're terribly sorry — we think you've got it wrong," May told parliament on Wednesday. "There'll be no second referendum. The people voted and this government will deliver on it."

Just like the "Wooferendum" march held earlier this month, hundreds of dogs and their owners joined the rally on Saturday.