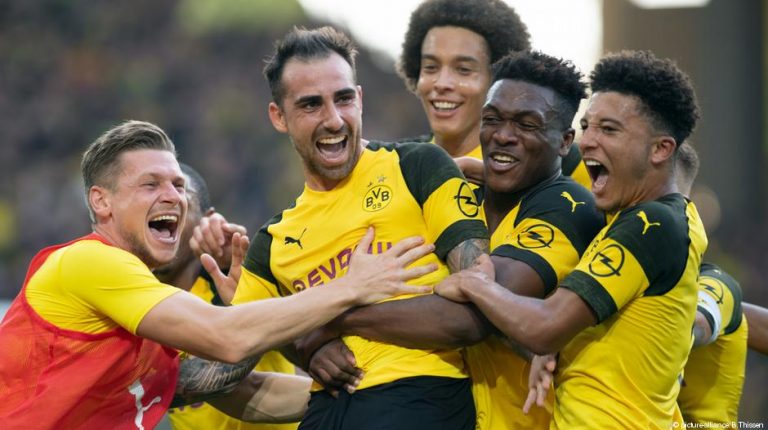 What a weekend! League leaders Dortmund produced the game of the season so far as champions Bayern slipped deeper into crisis. Frankfurt’s good form continued and the league also has its first coaching casualty.Good week for: Borussia Dortmund, RB Leipzig, Hannover, the Bundesliga

– Borussia Dortmund 4-3 Augsburg was a contender for the game of the season. Goals, saves, penalty claims, shots off the bar and a dramatic final 10 minutes made this one a real thriller. Paco Alcacer scored a hat-trick, including a 30 yard free kick to seal the win in the 96th minute. There will be defensive questions for both sides, but it was a breathtaking match.

– The pressure is always on Bayern Munich, but even more so after Dortmund's win. And yet another disappointing performance followed as a ruthless Gladbach side left the Allianz Arena with an historic 3-0 win. Niko Kovac's team never really looked like scoring, which is the biggest concern of all. Four straight games in all competitions now without a win for Kovac and his team. As Oktoberfest ends, the hangover has started to set in for Bayern, and Kovac is under pressure.

– While it's been a bad few weeks for Bayern fans, it's a great moment for fans who have longed for more competition in the league! With seven games played, four clubs (Gladbach, Bremen, Hertha & RB) are level on points behind Dortmund. Bayern finished the weekend languishing in sixth. Could we really have a title race this season?

– It was a great weekend for a couple of Americans in the league. Weston McKennie scored the opener for Schalke (his second in the week after scoring in Moscow on Tuesday) and delivered yet another battling performance for the club, pushing his body to the limit. Hannover's Bobby Wood also scored a brace to give his club their first win of the season – and his first was a particularly impressive header.

– "We will learn from this," promised Nuremberg coach Michael Köllner after his side crashed to a 7-0 defeat away at Borussia Dortmund two weeks ago – but few lessons appear to have been learned as "The Club" shipped six away at RB Leipzig, who went joint second. Yet while Nuremberg's away form is disastrous (played four, won none, scored one, conceded 15), they remain unbeaten at home.

– Werder Bremen beat Wolfsburg 2-0 on Friday night thanks to a Davy Klaassen masterclass. The result keeps giving life to Bremen's publically declared European charge. The win came on Florian Kohfeldt's birthday too, which was a nice touch.

– There were mixed fortunes for the Bundesliga's Europa League representatives. Eintracht Frankfurt built on their 4-1 win over Lazio with an impressive 2-1 victory away at Hoffenheim, with Ante Rebic scoring from distance before being sent off. But Bayer Leverkusen struggled to a flat goalless draw away at Freiburg which will increase the pressure on coach Heiko Herrlich.

– Tayfun Korkut (below) became the first coaching casualty of the season after being relieved of his duties at VfB Stuttgart. Despite being the second-best team in last season's Rückrunde, the Swabians have only won of their opening seven games. Saturday's 3-1 defeat to Hannover was the nail in the coffin for coach Korkut – and also the first win of the season for Andre Breitenreiter's Reds.

– This is Bayern Munich's worst start to a season in eight years and the first time since May 2015 that they have lost two consecutive Bundesliga games.

– Paco Alcacer has needed just 81 minutes to score six Bundesliga goals – this has never happened in the Bundesliga before.

– Borussia Dortmund's subs have scored nine goals after seven games – no Bundesliga team has ever had subs score as many goals in league history before.

– After Werder Bremen's 2-0 home win against Wolfsburg, Bremen have extended their unbeaten run at home to 17 games under Florian Kohfeldt. If the Weserstadion remains a fortress, Europe could well be calling.

– RB Leipzig's 6-0 win over Nuremberg was the highest win in the club's Bundesliga history … if that means anything.

– Augsburg's defeat in Dortmund was their 100th Bundesliga defeat.

– Mario Gomez (below) is now number 11 on the Bundesliga's all-time goalscorer list after scoring his 166th Bundesliga goal.

– Bayer Leverkusen's 0-0 draw away at Freiburg has made it the Werkself's worst start to a season in 21 years.

"Maybe we thought everything would iron itself out. When things were going well, perhaps they were going too well. We're all human and we got a bit complacent and comfortable."
– Bayern Munich coach Niko Kovac BEFORE his team's 3-0 defeat to Gladbach.

"This wasn't our best game, but it was fantastic for the fans and for us."
– BVB coach Lucien Favre after the 4-3 win against Augsburg

"Incredible. We've seen him score free-kicks in training and hoped he would score, and he did. Sensational. He played for 30, 35 minutes and scored three goals. What can you say? It doesn't get any better."
– Marco Reus, running out of superlatives to describe Alcacer

"I feel really comfortable in Dortmund. I can definitely imagine staying on at the end of the year."
– Paco Alcacer on his future

"Sometimes, you just have to leave the church in the village."
– Freiburg coach Christian Streich after his team's 0-0 draw with Bayer Leverkusen, using a German expression which means there's no need to exaggerate.

"The overall results at the start of this season were completely unsatisfactory."
– Stuttgart sporting director Michael Reschke on Tayfun Korkut's dismissal.

"It's perverse, the speed at which these topics become issues. The coach can't always be the fool, that's not right."
– Germany legend Matthias Sammer on Stuttgart's dismissal of Tayfun Korkut and the pressure on Niko Kovac in Munich.

This week's weird moment comes from Bundesliga 2! In the 94th minute of Union Berlin's home game against Heidenheim, the hosts were trailing 0-1 and on the verge of losing their unbeaten record in the league this season – until Polish goalkeeper Rafal Gikiewicz popped up at the back post to head home a late cross and rescue a point!

"My twin brother is an outfield player, so maybe I learnt it from him!" said the 30-year-old post-match.

Fortuna Düsseldorf ultras produced their biggest ever pre-match choreography ahead of kick-off against Schalke on Saturday. The circus-themed display covered both tiers and stretched around half of the Merkur Spiel-Arena. While fans waved red and white flags and held up pieces of red card, a huge image of a circus was hoisted up from the roof behind the goal – even the capo, the ultra with the megaphone, was dressed as a circus ringleader. "We're a circus club – it's always drama here!" one ultra told DW, while collecting donations to cover the €17,000 ($19,600) cost of the display, "and the circus is back in town!"