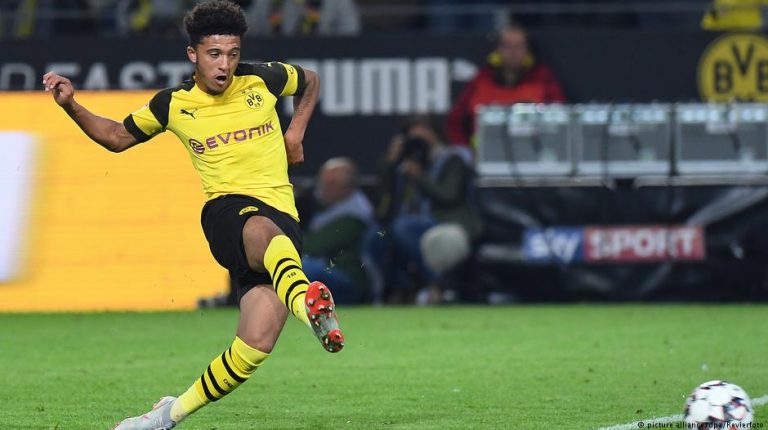 Borussia Dortmund are unbeaten, top of the table and have just pulled off a sensational comeback against Bayer Leverkusen. DW’s Matt Pearson found that there’s plenty to admire about both teams, but also worrying flaws."There’s nothing more shit than second place," reads a quote from Bayer Leverkusen’s former Dutch striker Erik Meijer on the walls of the BayArena’s west stand.

For some time now, second has been the best either of these sides could realistically hope for while, at the same time, being close to a minimum expectation for Dortmund. Though a rousing comeback from 2-0 down to 4-2 up sends them top, Saturday's wild contest of stray passes, slack defending and incisive blows suggests neither team looks ready to improve their lot much more than what it has been in recent years.

"Of course it increases our belief, it's the second time we have had a difficult match where we were behind," Dortmund midfielder Thomas Delaney told DW after the match. "Red Bull Leipzig was the first one, and I think that it makes us grow that we have to pull ourselves out of the swamp and go that step further. I don't want to talk about being a championship candidate or anything but, of course, we’ve had a very good start."

Lucien Favre’s men have indeed had a good start to the season, but their start to Saturday’s match was anything but. Coming off the back of a 7-0 win over Nuremberg, Dortmund could reasonably have been expected to start in confident fashion. Instead, they were jittery and incapable of building from the back — though that didn't stop them from trying.

Those in red and black smelt their opponents' unexpected vulnerability and ferociously pressed to exploit it. Ten minutes in, a simple ball forward from Achraf Hakimi was cut out with Dortmund's midfield streaming forward and, to compound that error, two BVB men then fell at Kai Havertz’ feet. While the fact that Alario's poor cross found its way to the onrushing Mitchell Weiser was fortunate, the right back's thunderous finish was as emphatic as they come. Favre had it right when he said his men made a series of "unnecessary mistakes."

Another was to come before the break, as Dan-Axel Zagadou and Manuel Akanji both decided the other would clear a corner and allowed Jonathan Tah to fill his boots. The two defenders were part of a backline with an average age of under 21.

And that's exactly what they did. First Jacob Bruun Larsen (20) stabbed home from close range after Lukas Hradecky spilt Marco Reus’ volley, then Jadon Sancho made the latest in a string of eye-catching interventions from the bench.

The 18-year-old English winger picked up the ball deep in his own half and drove at the space Leverkusen naively left behind as they tried to kill the game with a third. He twice exchanged passes with Reus before the Dortmund skipper leveled things up.

"We just have that special chemistry. I read him, he reads me," said Sancho of the equalizer that saw the ball travel from one goal to the other in a few seconds.

It was another substitute who made the next critical intervention. With Dortmund probing around the box without much penetration, Paco Alcacer took matters into his own hands, laying the ball off before charging to the front post to flick in the cross.

Sancho and Alcacer combined in injury time, as the two took advantage of Hradecky's decision to come up for a corner to seal the win. This season, Sancho has provided a goal or assist every 31 minutes and Alacacer every 17 minutes.

Still, Dortmund simply cannot keep "pulling themselves out of the swamp," to use Delaney’s phrase. Late comebacks and high-impact substitutes will win games, but Bayern have demonstrated that it's consistency and experience that wins leagues. As thrilling as Saturday’s game was — and as much as these sides have the attacking talent — the soft underbellies are all too apparent.

Despite it all, Dortmund are top, at last. And while Delaney and his boss were reluctant to talk about a title tilt, those fans and Bundesliga observers starved of a real race for so long won't be so reticent. Favre will demand that BVB learn. As things stand, under Heiko Herrlich Leverkusen haven't.