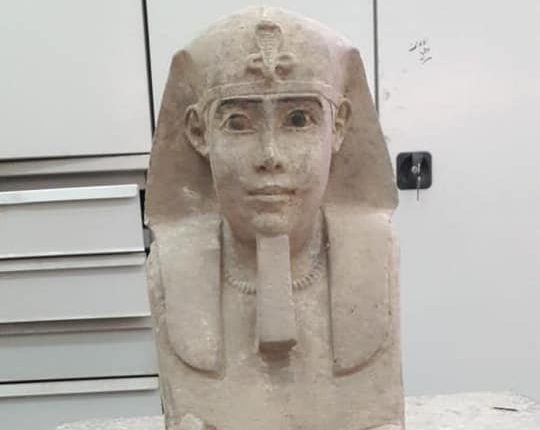 The Ministry of Antiquities announced on Sunday the discovery of a sandstone sphinx statue in Kom Ombo in Aswan governorate, according to a press release published by the ministry. The discovery was made by an Egyptian archaeological mission assigned to work on the project of reducing ground water in the area.

Mostafa Waziri, secretary-general of the Supreme Council of Antiquities stated in the press release that the statue most likely belongs to Ptolemaic era, “as it was found in the south-eastern side of the Kom Ombo temple, the same location where the two sandstone reliefs of King Ptolemy V were previously uncovered two months ago,” he said.

The mission will continue studying the sphinx statue in order to reveal further details about the exact era of its belonging.

Speaking of the similarities the sphinx statue has with the two previously discovered reliefs, Abdel Moneim Saeed, general director of Aswan Antiquities explained that the reliefs were also made of sandstone. Yet, he asserted that they were “inscribed with hieroglyphic and demotic writings.”

Over a month ago, another Ptolemaic era sarcophagus was found in Alexandria, where scientists suspected it could have the remains of Alexander the Great. Yet, the ministry denied the claim, by revealing it has skeletons of two males and a female who lived during the Ptolemaic era.