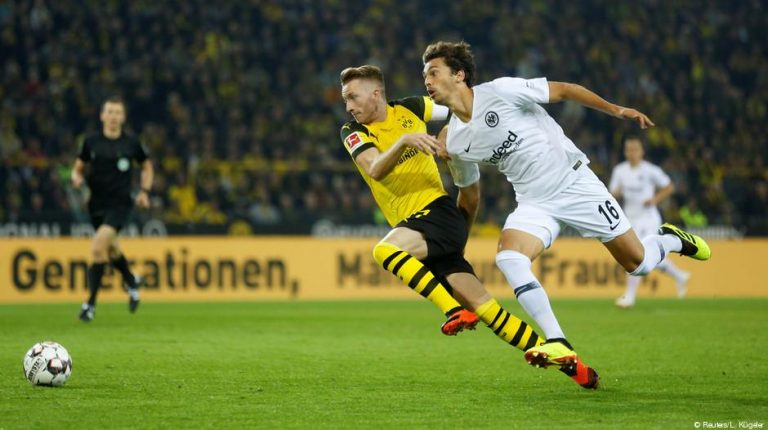 Lucien Favre’s Dortmund will hope to bounce back after dropping points away to Hannover last weekend. Jacob Bruun Larsen gets a chance from the start, while Axel Witsel is rested after international duty with Belgium.24′

18′ Gacinovic clips Schmelzer’s heels and gets a talking-to from the ref, but no card.

6′ Filip Kostic with the first serious shot of the night, fed by a lovely diagonal through ball from Gacinovic that completely wiped Lukasz Piszczek out of contention. Kostic’s driven shot was meat and drink for Roman Bürki though.

3′ Nasty early knock for Marcel Schmelzer. The Dortmund left-back is playing his 350th game in all competitions for the club tonight.

— Jacob Bruun Larsen, surprise starter tonight for BVB, is coming off the back of a four-goal game in a friendly against VfL Osnabrück during the international break. He netted all his goals before half time.

— Just a few minutes to go until the game begins. Bavarian Benjamin Cortus will be in charge of tonight’s match. Meanwhile, “You’ll Never Walk Alone” rings around the Signal-Iduna Park.

— Some surprises in the Dortmund XI as well. Jacob Bruun Larsen gets a start in attacking midfield, Maximilian Philipp looks like he’s starting up top, while Delaney and Dahoud will marshal the midfield. And Dortmund’s bench is notably strong, with Axel Witsel, Mario Götze Paco Alcacer and Jadon Sancho all riding the pine.

— Time for the starting line-ups, with an hour to go until kick-off. Sebastian Haller leads the line for Frankfurt, with Mijat Gacinovic, Filip Kostic and Marco Fabian behind him.

— Historical stats also don’t provide too many clues on form. Dortmund have won their last seven at home against Frankfurt, but the Eagles haven’t lost in 11 Friday evening Bundesliga matches.

— Dortmund only drew 0-0 at Hannover last weekend, while Frankfurt lost at home to Bremen. So both clubs have points to prove.

— Welcome to DW’s live coverage of the Friday evening Bundesliga fixture. Matchday 3 kicks off with the German Cup holders visiting arguably the toughest challengers to Bayern Munich this season.