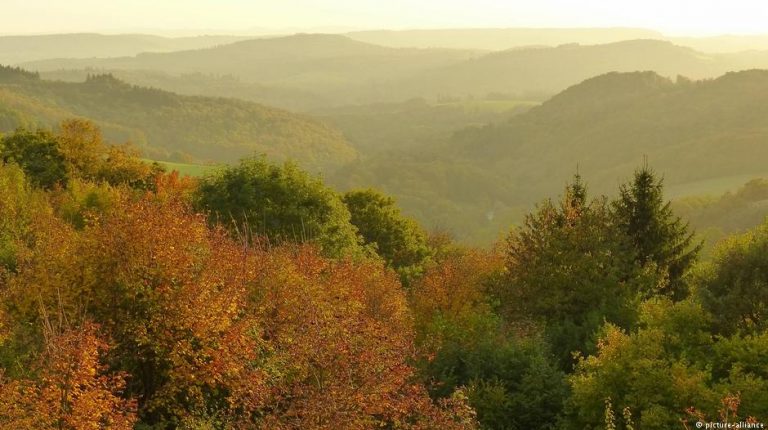 Steeped in myth and legend, the forest has long held deep meaning and been a source of fascination. How did the woods become so symbolic for so many, from the romantics and the Nazis to modern environmentalists?Few places in Germany are as brimming with tales of mythical beings as Reinhardswald. The woodland is at the heart of a 600-kilometer (372-mile) route once home to magic mirrors, fairy godmothers, princesses, and goblins — if legends are to be believed.

Near Reinhardswald, a courageous prince was said to have awoken sleeping beauty from her long slumber with true love’s first kiss. And Rapunzel let down her long golden hair from a tower so her rescuer could clamber up.

In fact, it was around this erstwhile heavily-forested place that the Brothers Grimm collected many of their fairytales, helping to cement the forest’s central place in the German imagination.

Once upon a time

The Grimms simply wrote down the stories that had been part of an oral folk tradition for generations. Whether a princess really slept for 100 years is immaterial. What’s important is the the message behind the stories, as well as their setting: a dark and sinister woods home to all kinds of danger.

In the tale of Hänsel and Gretel, for instance, the unfortunate siblings are abandoned in the forest by their parents. There, they must contend with a cannibalistic witch, recaps Erik Aschenbrand, manager of the Reinhardswald park.

“The witch is the personification of the danger that lurks in the forest,” said Aschenbrand. “But they overcome, the danger and emerge from the forest happy,” he points out.

In that reading, the bleak forest is an unpredictable realm full of challenges that must be overcome. But does that make it evil? Well, that depends on your perspective. The forest is home to wild creatures, and humans have long been wary of what might lurk there, say experts.

“The Black Forest is not called the Black Forest because it casts dark shadows,” explains Uwe Schmidt, a professor of forest history at the University of Freiburg in southern Germany.

“If you look at a painting from the Middle Ages, hostility toward the forest really jumps out. The forest isn’t even painted because it’s ‘black’ — or uncivilized and inhospitable.”

In contrast to today’s cities, in which green spaces and trees are treasured, wild nature was not welcome to the settlements of the Middle Ages. For instance, medieval Freiburg had virtually no trees, although it is literally in in the Black Forest, says Schmidt.

Still, even as medieval societies viewed the forest as gloomy place, they also saw it as an apparently limitless source of wood and resources to be exploited. It wasn’t until the Baroque period of the early 17th and 18th centuries that the consequences of such an attitude became clear.

During this period, cities grew rapidly, commerce bloomed, and palaces and castles became larger and more pompous. Merchants and craftsmen in particular strove to enhance their wealth — and the resources to do so came largely from the forest.

In the 18th century, up to 10 million cubic meters of wood a year was used for new roof beams, ship hulls and charcoal, says Schmidt. The latter fueled the first industrial enterprises, as the use of coal was still in its infancy.

As a result, forests were disappearing, particularly near cities and commercial centers.

But just as woodlands were fading from the real landscape, their presence was growing in the German imagination — namely in culture, music, art and literature.

Romanticism and the last forest

At the beginning of the 19th century, the love of nature that characterized the romantic movement inspired writers, like the Grimms, to glorify the forest and the poor people who had always lived there. Landscape artists, including Caspar David Friedrich — who is renowned for his landscape paintings, including of trees and forests — became immensely popular.

Germany embarked on tree-planting schemes to replace felled forests. Soon, Schmidt explained, forestry became a dream profession, and bagging a forester as a husband became a goal for many women, who due to their gender and the time period, couldn’t go into the job themselves.

At the same time, visitors came to the forest looking for an idealized, natural and intact world as an escape from the chaotic industrializing cities of 1800s.

“City folk have a completely different view of nature than the people who live there. They see the forest as the opposite world to their city,” he said.

But as Germany turned toward fascism in the 20th century, the connection to the forest took on a darker meaning.

When the Nazis came to power, they capitalized on the myths of the German forest, and on its good reputation.

“During the time of National Socialism, the forest became ideologically charged,” said Schmidt.

According to that ideology, the Germans were innately connected to the woodlands through the nation’s founding myth — the Battle of the Teutoburg Forest.

The story goes that Germanic tribes led by Hermann slaughtered the Roman legions in the forest, causing Rome to abandon its plans to take over the lands east of the River Rhine.

The Nazis built out the mythology that the German forest and people were one and the same. This idea served to exclude groups not deemed to be part of this unit.

This ideology propagated the view that Jews were the people of the steppes, or grasslands, and were not capable of understanding Germany’s forest culture, explained Schmidt.

Even so, when World War II ended, the forest again became a place of respite. “The forest regenerated more quickly than the bombed-out cities,” said Schmidt. Under the trees, people could forget all the destruction and violence, at least for a time.

Since then, the forest has remained a treasured place. It became a poster child for Germany’s environmental movement in the 1980s, when public concern over acid rain destroying the country’s remaining woodlands reached its zenith.

“Veritable end-time scenarios were being projected when it came to how forests might look in Germany in two or three decades,” said Schmidt, adding that these concerns helped make Germans more environmentally conscious and aware of the consequences of an affluent lifestyle.

In Germany, the forest has always been a “mirror for society” and its anxieties, believes the forest historian.

“German history is an excellent example of the diverse functions a forest can have, and which values it possesses for a society,” Schmidt concluded.