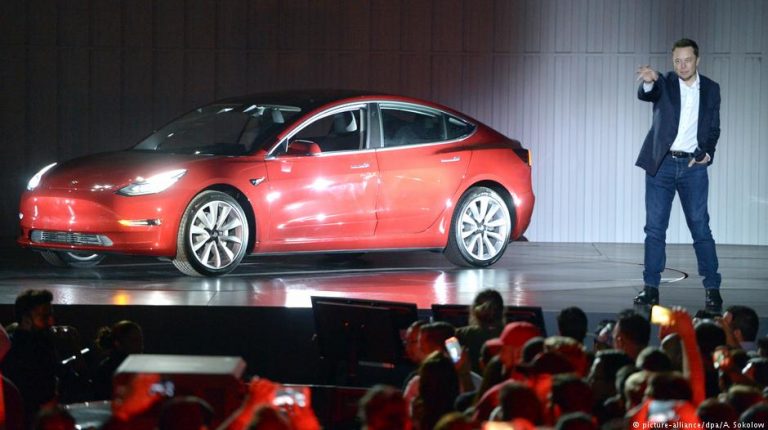 Elon Musk has once again caused a whirlwind of speculation with a few tweets. Afterwards Tesla stock rose and trading was halted for around two hours. Only Donald Trump can move markets more.On Tuesday, Tesla CEO Elon Musk, posted a two sentence missive saying that he was “considering taking Tesla private” which would transform the forward-looking electric carmaker back into a privately held company. At first it was unclear if it was a joke or even really from Musk, who has 22.3 million followers on Twitter.

It nevertheless pushed up the stock price, until trading was suspended for nearly two hours in the afternoon. After the company confirmed that the tweet was indeed from Musk, trading was restarted. At the end of the day the company’s shares were up 11 percent, a few cents shy of $380 (€328) and near their all-time high.

The company which was founded in 2003 and first went public on June 29, 2010 now has a market capitalization of around $60 billion. Buying it back at a price of $420 as Musk suggested would require a huge outlay, costing around $72 billion.

Musk, who owns around 20 percent of the company’s stock has often complained about the short-term — understood to mean shortsighted — demands of fickle shareholders. Delisting from the stock exchange could partially free him of this accountability. But what other advantages are there to go private and who will pay?

The questions around financing are no little matter, especially for a company that has often missed production targets, still loses money and even recently asked suppliers to refund a portion of what Tesla had previously paid for products, in order to help the carmaker make a turn into the black and become officially profitable.

In an email to Tesla employees on Tuesday, Musk said going private would save the company from distractions like swings in the stock price and quarterly earnings targets, which would leave time and energy to focus on “our long-term mission.” He highlighted the experience of SpaceX which “is far more operationally efficient” because it is privately held.

“The advantage of Tesla going private is that Musk can have complete control and stop worrying about a short-term financial focus. Once private, Tesla could focus on long-term projects more easily. Henry Ford did this exactly 99 years ago,” Detroit-based industry expert John McElroy told DW. “The disadvantage is that Musk could no longer use equity markets to raise money for the company. Ford Motor Company was extremely profitable when Henry took it private. Tesla is not.”

And simply stopping nagging questions from investors each quarter will not put their concerns to rest. Structural problems will not magically disappear and someone will need to finance such an enormous undertaking, an especially difficult task for a company with no steady cash flow. For a leveraged buyout, backers typically put up little cash and finance the rest with debt. In Tesla’s case that would mean bank loans in the tens of billions of dollars.

Read more: With cash concerns clouding Tesla’s future, will the dawn yet break for Elon Musk

Flying to Mars or building Hyperloops may be glamorous, “but when you run a business, you should focus on the core business and the basics, and not waste your time on emotional tweets and pipedreams. It’s not good for credibility — and credibility is the most important thing you need to have a stable company,” Ferdinand Dudenhöffer, head of the Center of Automotive Research at the University of Duisburg-Essen, told DW.

The hieroglyphics known as tweets have occupied the minds of journalists, investors, fans and followers over the past few years. And one of the most mysterious tweeters is Musk, who is also one of the most active tech CEOs on Twitter, as a recent study of all his 4,925 tweets by the Wall Street Journal shows.

Since the beginning of the year he has come under increased scrutiny for his use of the social media platform. On April 1 — April Fool’s Day — he tweeted that the company “has gone completely and totally bankrupt” which was a joke.

Additionally, Musk has repeatedly used Twitter to take potshots at other CEOs, investors and “holier-than-thou” critics. Was this latest announcement just an ambush on short sellers who are betting on the decline of the company? In his email Tuesday, he explained that “as the most shorted stock in the history of the stock market, being public means that there are large numbers of people who have the incentive to attack the company.” CNBC estimated that yesterday’s actions cost short sellers $1.3 billion.

Dudenhöffer thinks the Securities and Exchange Commission will open an investigation into the matter. If they prove Musk is guilty of stock price manipulation he can expect heavy fines. “It will be shown if he is just tweeting around or actually has financiers who would make this repurchase program possible. If it’s just a bluff, he can get in trouble with the stock exchange.”

Musk assures everyone that he is not kidding or just trying to accumulate more control in his own hands. Perhaps in the end his call to go private may be yet another in a long line of marketing moves designed to keep Tesla in the news. If nothing else it is an exciting distraction from the company’s latest quarterly results which came with an eye-watering $717.5 million loss.

Why you need an email verifier API?