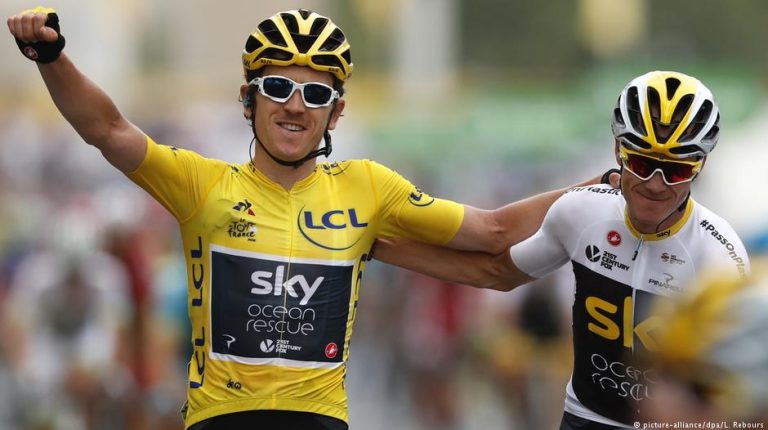 Bradley Wiggins has said he believes Geraint Thomas’ victory at the Tour de France won’t be a one-off. However, it’s not even certain the longtime servant of Chris Froome will be with Team Sky in a year’s time.Speaking in his podcast on Eurosport following Sunday’s final stage of the Tour de France, Bradley Wiggins, the 2012 winner, said he saw no reason why the Welshman couldn’t win it again next year.

“He’s at that ripe age now, 32,” Wiggins said. “He’s matured as a person and an athlete and his laid-back approach will continue to carry him through.

“I wouldn’t put it past him to win again next year. This could be the start for him now. He’s won the Tour and it will only drive him on to do it again.”

However, Thomas’ contract with the British outfit expires at the end of this season, and when asked after Sunday’s race about whether he would be with the team next year, Thomas indicated that his future was up in the air.

If Thomas remains with Sky next year, it could pose a dilemma for the team, with Chris Froome determined to win a record-equaling fifth Tour.

“He wants to win a fifth Tour, no doubt. He’ll be back, it’s a part of him and I think he can do it,” Team Sky general manager Dave Brailsford said when asked about Froome’s plans.

Froome had hoped this would be his year to win a fifth Tour, despite the controversy surrounding his participation – he was only cleared to compete days before the start of the event after an “adverse analytical finding” for salbutamol during his 2017 Tour of Spain victory.

However, the Kenyan-born Briton lost a lot of time on teammate Thomas after crashing twice in the opening nine stages. After the Welshman captured the yellow jersey on the 11th stage, Froome turned “domestique” for Thomas – a reversal of their customary roles.

The question next season will be: Having won a Tour de France, would Thomas be prepared to return to cycling in Froome’s shadow again? There’s no indication Froome would be prepared to so the same for Thomas on a regular basis.

Asked how he expected Sky to choose a team leader for next year’s Tour, Froome replied: “That’s a question for team management really. It’s not for a rider to make those decisions.”