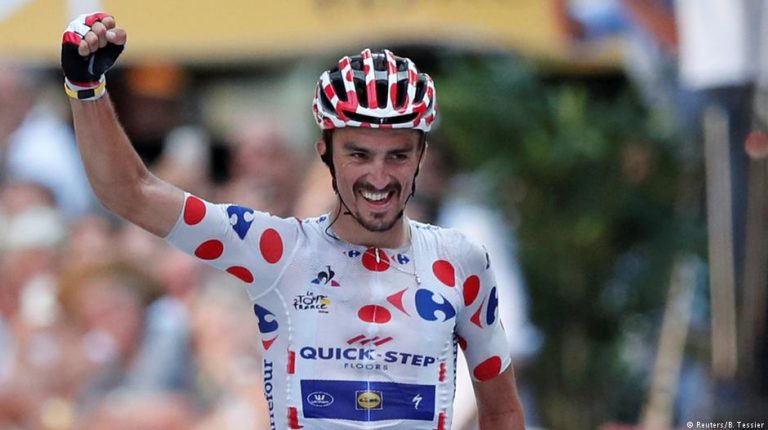 Crashes and crowd protests contributed to a day of intense drama in France as Julian Alaphilippe took first on the 16th stage. A number of riders had to be treated by doctors after a tear gas incident involving farmers.The Tour was briefly interrupted when police were forced to use tear gas to disperse a farmers’ protest that blocked the road with bales of hay at the 29km mark.

Famers’ protests are common on the Tour but this incident is the latest in a number of security breaches to affect this year’s competition. Chris Froome, who has come under added scrutiny following investigations into alleged doping, which he was later cleared of, was spat at by fans on Alpe d’Huez, while 2014 Vincenzo Nibali saw his participation ended after clashing with a fan on the same mountain.

The stage resumed after a 15-minute interruption and Alaphilippe stayed with the breakaway group until the last climb to the Col du Portillon. It was the Frenchman’s second stage win, having powered to victory in the tenth stage earlier this month.

“It’s pure happiness after a day of suffering,” said Alaphilippe, who tightened his grip on the polka dot jersey for the mountains classification.

The Quick-Step Floors rider got a slice of luck along the way, overtaking leader Adam Yates after he crashed off his bike in the final descent.

“I knew the last kilometres of the stage. I’m sad for Yates who crashed but it could have happened to me. I took a lot of risks. It’s bike racing,” the said Alaphilippe.

Geraint Thomas retains his lead at the top of the overall leaderboard, with fellow Briton and Team Sky rider Froome 1 minute and 39 seconds behind. Dutchman Tom Dumoulin occupies third, 11 seconds off Froome.

Sagan, meanwhile, secured a record-equaling sixth Green Jersey for the points classification. He leads Norway’s Alexander Kristoff by 282 points with 270 still up for grabs, meaning he will be guanateed to win it providing he makes it to Paris.