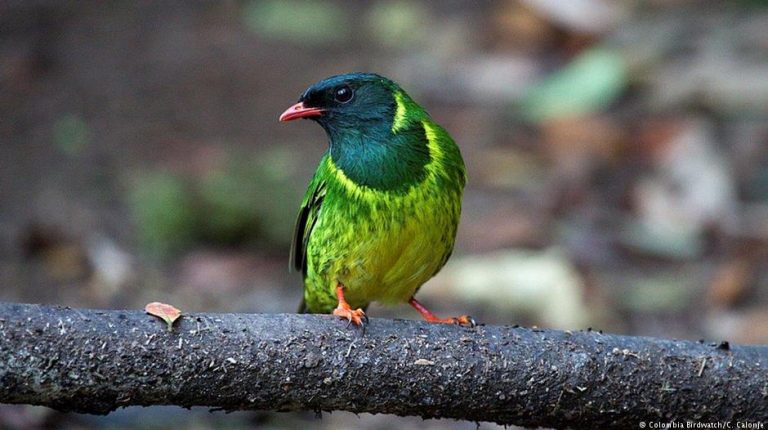 Colombia teems with birds, but until recently fighting between the government and guerilla groups scared visitors away. Now, former war zones are fast becoming bird-watching hotspots. And that could help preserve them.Until recently, the Farallones National Park was a key hideout for Colombia’s FARC rebels. But as the guns fall silent and Colombia transitions out of five decades of armed conflict, this mountainous cloud forest is receiving another kind of visitor.

One crisp morning, a dozen tourists from China visit a small farm on the edge of the park that has set up feeding stations for hummingbirds.

They fire away at the miniscule creatures with their telescopic lenses, hoping to get the perfect picture. Suddenly, the bird watchers hear the loud cry of the Toucan Barbet – a red-chested species found only in Colombia and Ecuador – and point their lenses toward the sky.

“Colombia is a really special country,” says Kungliang Wu, a biologist from Southern China on a two-week bird-watching tour of the country. “It’s a tropical place, but you have [forests at] many different altitudes. So there are a lot of different species.”

Read more: The Colombian monkeys that could save themselves and their habitat

Colombia has more bird species than any other country in the world. According to Bird Life International, around 20 percent of all the world’s species can be found here.

But until recently, many areas of countryside were controlled by gangs or rebel groups, making it impossible for tourists or researchers to access much of the birdlife.

Now, as security improves, the Colombian government and local conservationists hope that bird watching can create thousands of jobs.

Government officials and local tour companies say this type of tourism could help preserve the forests by giving villagers in rural areas a new source of income, and an incentive to not clear forest to make way for cattle or agriculture.

Deforestation increased 43 percent in Colombia in 2016, and the government is struggling to contain it, particularly in far-flung areas where there is little law enforcement.”Bird watchers spend up to $400 [€343] a day to go on tours,” Christofer Calonje, owner of a bird-watching company in the city of Cali, told DW. “This trickles down and benefits many people, from the hotels, to the guides to the villagers who cook for tourists.”

In the Farallones National Park, bird watching already appears to be catching on.

From war zone to tourist hotspot

Throughout the 1990s and in the early 2000s the park was sheltered FARC troops, which benefited from its strategic location between the Pacific Ocean and the nearby city of Cali. The guerillas held hostages in the park, and in 2000 attacked a nearby hydroelectric plant.

Now, a few dozen bird watchers come on daytrips from Cali each day, to a road that borders the park. It’s not a huge number of people, but locals have already seen some benefits.

Dora Londono, a farmer who has lived near the national park for the last 30 years, has set up an observation deck for bird watchers on top of her modest home. She makes a living selling drinks and meals to bird watchers who visit the area.

“Tourism has done a lot to improve our quality of life,” said Londono, whose family initially cleared a small chunk of the forest to grow sugarcane and bananas.

“My husband used to farm for a living, and I also tried to help him by cleaning nearby homes — but now we don’t need to do any of that.”

Calonje says bird watchers started to visit Farallones National Park around eight years ago, when the government began to push the FARC rebels to more remote areas as part of a large military offensive.

A peace deal signed in 2016 between the Colombian government and FARC led to disarmament of around 6,000 rebel troops, and helped secure law and order in this part of the country.

Calonje says his company is now launching bird-watching tours in more remote areas that also have rich birdlife, like the Sibundoy Valley in Southwest Colombia and the Guaviare province in Colombia’s eastern plains. He calls them the “peace destinations.”

“The peace deal hasn’t just helped with security,” Calonje said. “It has also changed what is said about Colombia in the media, and that encourages more people to come here.”

Forests at risk without FARCBut the end of the war with the FARC has also presented challenges for Colombia and its forests.

One problem, environmental groups say, is that once FARC relinquished control of some remote areas of the country, the guerrillas were replaced by land speculators, illegal miners and drug traffickers, who have chopped down forests to make way for cattle ranching, gold mining and cocaine production.

According to the Humboldt Institute, Colombia’s largest environmental research institute, 79 percent of Colombia’s overall deforestation last year took place in areas that used to be under FARC influence.

Read more: The world is losing vital forests quicker than ever

“We still need to conduct more research on the specific causes behind this deforestation,” Jose Manuel Ochoa, the Humboldt Institute’s director of biodiversity monitoring, told DW. “But we also need to start looking at what factors reduce deforestation.”

One policy that has worked, Ochoa says, is creating reservations administered by indigenous communities and Afro-Colombian groups who have survived in the forest for hundreds of years.

Hernando Garcia, deputy-director of the Humboldt Institute, said helping communities in remote areas to make a living from conservation could also play an important role.

“If the forest generates opportunities for development, communities will take care of it,” Garcia told DW. “Ecotourism is one of those opportunities but there are others, like working with natural products that don’t force you to take down the forest.”

Bird watching is only a small aspect of Colombia’s tourism industry. But as ever more tourists visit the country, some rural people are starting to make a living from it.

At the San Antonio Cloud Forest near the city of Cali, Raul Nieto has turned his small farm into a bird-watching center with dozens of feeder stations. Every day, some 30 tourists pay a $5 entrance fee to see the birds tucking in. Nieto says business is improving as word spreads of the great number of hummingbirds — some 40 species — that stop off at his farm.

“The number of people visiting has grown by about 20 percent this year,” Nieto told DW.

Nieto’s farm is surrounded by a cloud forest that was declared a protected area in 2008. Local farmers are not allowed to raise cattle here, or chop down trees. These restrictions make it an ideal bird-watching destination, where another three farms are also opening their doors to tourists.

Over the last decade, the number of bird species recorded in this pocket of cloud forest has risen from 108 to 209, according to the eBird digital platform.

As this small corner of Colombia welcomes the outside world after years of violence, conservationists hope the country as a whole can manage to balance economic interests with forest preservation.