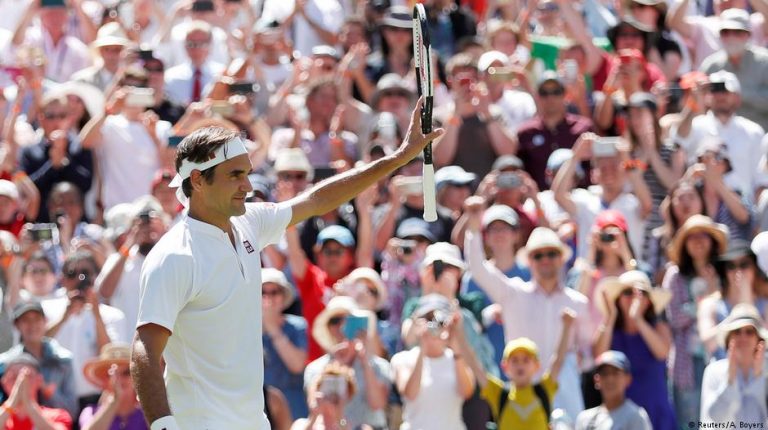 Roger Federer had little trouble advancing to the second round of the third Grand Slam event of the season. Serena Williams had to work a little harder as she made a successful return to Wimbledon.The defending men’s champion, Roger Federer, shook off the scorching London heat to open his campaign for a ninth Wimbledon title with a 6-1, 6-3, 6-4 triumph over Serbia’s Dusan Lajovic on Centre Court on Monday.

“I’m happy to be back at Wimbledon,” Federer said afterwards.

Federer now moves on to face either Lukas Lacko of Slovakia or the French qualifier Benjamin Bonzi in the next round.

Serena back on grass

On the women’s side, Serena Williams, seeded at 25 this year despite being only 181st in the WTA rankings, got off to a slow start on Court One, but she recovered to prevail 7-5, 6-3 over the 107th-ranked Arantxa Rus of the Netherlands.

“It’s a great feeling to be back, it’s been a couple of years since I played on grass, so it is difficult trying to find the rhythm,” she said afterwards.

“I don’t know if I’m relieved, more motivated, but I am happy to get through that,” added Williams, who returned to action at Roland Garros last month after taking time off to have her first child. However, that comeback ended with her withdrawing due to injury in the fourth round.

The women’s draw had the first big tournament shock as No. 4 seed Sloane Stephens exited in a 6-1, 6-3 upset to Croatia’s Donna Vekic.

First Germans through to second round

Egypt has opportunity to transition to higher growth levels: EIB