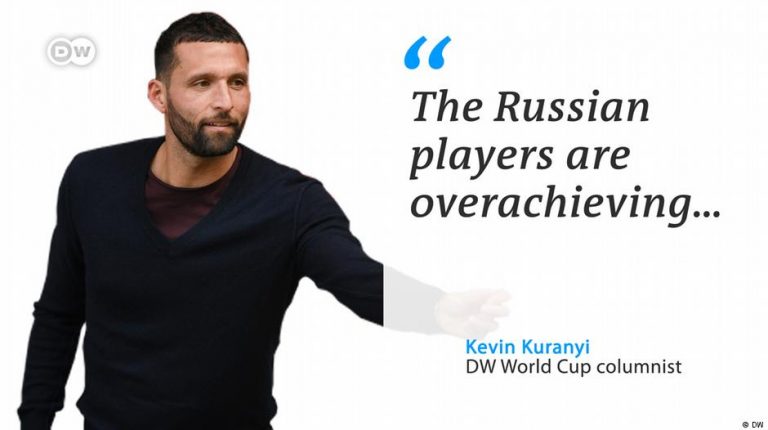 Former Germany striker Kevin Kuranyi has been surprised by the enthusiasm that the Russian national team has shown in the host nation. In his DW column, he also weighs in on the future of Germany coach Joachim Löw.The euphoria unleashed by the success of the Russian national team has been huge. Nobody could have foreseen this. While Russia were in the process of beating Spain in a penalty shootout, I was in a plane that was on its final approach to Moscow. The pilot announced the result over the PA system and the passengers responded by jumping out of the seats and running up and down the aisle.

I had to take a deep breath as the plane started to shake and all I could hope for is that the pilot would get it down onto the runway safely. The pilot could have at least waited a couple of minutes! But this was a clear sign that Russia really has caught World Cup fever.

What’s happened in Russia is precisely what the organizers had hoped. The national team has developed an amazing team spirit and is being carried along by the exhilaration of the fans. Coach Stanislav Cherchesov is leading his charges with a strong fatherly hand and the players are overachieving.

Take goalkeeper Igor Akinfeev, for example. We have always known that he is hugely talented, but in the past he has often been prone to hair-raising mistakes, something that damaged his reputation. At the moment, though, he doesn’t seem to be error-prone and is showing what he is capable of. That’s the difference. I regard him as a top-class goalkeeper.

Mbappe the heir apparent to Messi and Ronaldo

So it should be a very tight quarterfinal contest for Russia against the strong Croatians. Zlatko Dalic’s side is certainly the more talented of the two, but the Russians will give everything they’ve got — and having the home fans behind them gives them an extra boost.

Besides the Russian team, one individual player has really caught my eye at this World Cup. Kylian Mbappe is an unbelievable footballer. His pace and his finishing are outstanding. He is a cracking player, and still only 19 years old. I believe he will be world football’s next superstar, following in the footsteps of Lionel Messi and Cristiano Ronaldo.

Does Joachim Löw still have the energy?

Such stylish excellence seems like a distant dream for us here in Germany right now. Germany’s showing at this tournament was catastrophic and utterly disappointing. Virtually nothing went right and even here in far away Moscow, I’ve heard all the discussion about the future of the German national team coach.

I think Mr. Löw should only continue in the job if he is really convinced that he is up to it. If he believes that he still has the drive and the energy to embark on the necessary rebuild, then he should be given the opportunity to do so, because he has done so well over his long tenure. However, if he has his doubts, it would be better if somebody else took over.

One thing I’ve noticed during this World Cup is how smaller footballing nations continue to develop. Their coaches too are constantly improving. These teams are well organized and can really battle hard.

When a country like Uruguay, with a population of just 3.5 million, produces such great players as Luis Suarez and Edison Cavani, and its national team plays football with such passion, it says a lot about what can be achieved through team spirit and good preparation.

Kevin Kuranyi is covering the World Cup in Russia as a columnist for DW and a television pundit for public broadcaster ARD. Kuranyi is a citizen of three countries represented at the World Cup: Germany, Panama and his native Brazil. He made 52 international appearances for Germany and was part of the team that reached the final of Euro 2008. After a rift with coach Joachim Löw, which he has described as “the biggest mistake of my career,” Kuranyi was kicked off the national team. Towards the end of his playing career, Kuranyi spent five years in Russia before hanging up his boots in 2017.