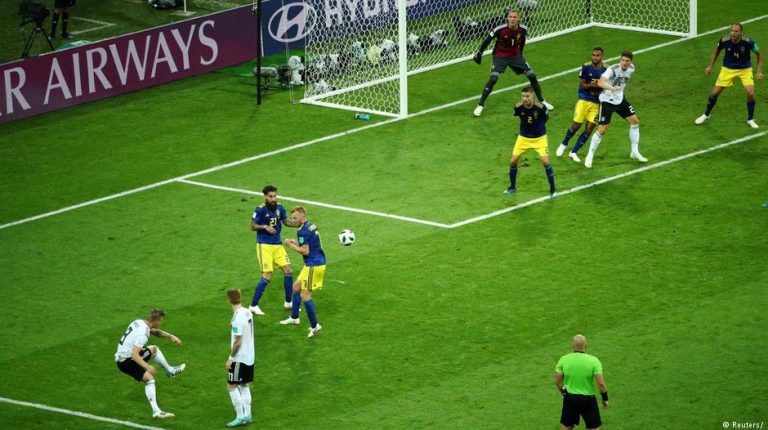 Dramatic goals with minutes remaining – the 2018 World Cup has delivered them aplenty. Then again, aren’t late goals more likely anyhow due to last-ditch heroics? A German sports scientist crunches the data for DW.Do goals usually tend to happen in the final minutes of a match? Is that a statistically true statement?

If you investigate a lot of goals over a lot of seasons in professional football leagues, then you will find that there are some differences between 5-minute blocks over a match. But there is no significant difference between a block, say, from 10-15 minutes into the first half or from 85-90 minutes in the second half. And it has to be said that the lowest probability of scoring goals is after the 90th minute—in the descriptive data, it’s the lowest value. This is perhaps the case because sometimes there are only three or four minutes’ additional time, so the probability is not very high that a team can score a goal there. But there is no difference, in a given minute, in terms of the probability that a team scores a goal.

It was kind of an unquestioned truth when I was growing up that there’s a much higher chance of ANOTHER goal being scored in the 5 minutes after an initial goal is scored. Is that true?

Some studies have analyzed this point, and this is definitely not true. If a team has scored—you could imagine them celebrating, they aren’t concentrating perfectly—then it might be easier for the other team to score a goal. This is statistically not true. The other point connected to that is whether a goal before halftime is very important for the end result of a match. That’s not true either.

But I swear I just heard a commentator say the opposite! OK, so what other theories aren’t true?

Another point is whether experts can predict the outcomes of matches better than laypeople. This is not true. People who are very involved in football—have played football, watched a lot of football, are really involved in that business —they do not have a higher probability of predicting the outcome of a football match than people who have nothing to do with the sport. But the football experts have the feeling that they are better. That means they trust themselves a lot more, their predictions, than laypeople do. That means these experts believe they are good at predicting the outcome of football matches, and do not have a very realistic point of view in terms of predicting complex events. And laypeople have a better feeling for whether their predictions are good or not good.

So with sports gambling now legalized in the US, I should maybe go gamble against an overly confident “expert” – I could make some money!

Professor Daniel Memmert is a researcher at the German Sport University Cologne who heads of the institute of training science and computer science in sports.