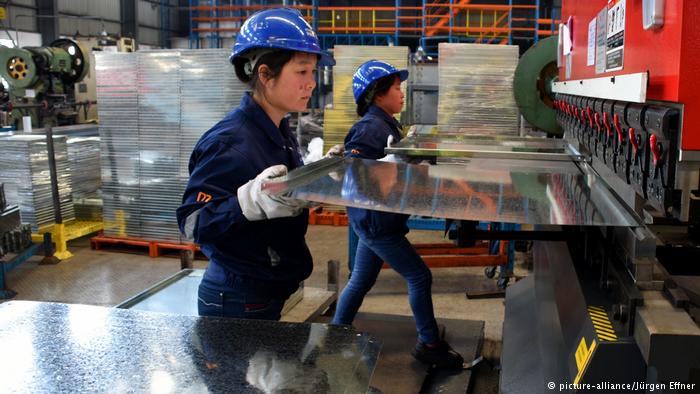 China’s economic expansion has held steady in the first months of the year amid a worsening trade dispute with the United States. Growth was primarily driven by strong e-commerce and factory output.China’s economy grew more than expected in the first quarter as it withstood headwinds from Beijing’s campaign against financial risk and trade tensions with the United States.

The world’s second-largest economy expanded by 6.8 percent in the January-March period, beating analysts’ expectations and the annual rate of around 6.5 percent targeted by the government.

Growth remained resilient even as Beijing fought its war on pollution during the winter months by cutting production for many steel smelters, mills and factories.

“The national economy maintained the momentum of steady and sound development,” said Xing Zhihong, a spokesman for the National Statistics Bureau.

Xing acknowledged the cloud of international uncertainties, but argued that China-US trade frictions did not pose a major problem for the domestic economy. Instead, he pointed to risks at home.

“The problems of unbalanced and inadequate development in China are acute, and the tasks for reform and development are daunting.”

After years of breakneck growth driven by exports and debt-fueled investment, authorities are increasingly worried about a possible credit crunch.

China’s trade balance swung to a rare deficit in March as exports shrank by 2.7 percent over a year earlier. Trade accounts for less of the country’s economic activity than in earlier years, but still supports millions of jobs.