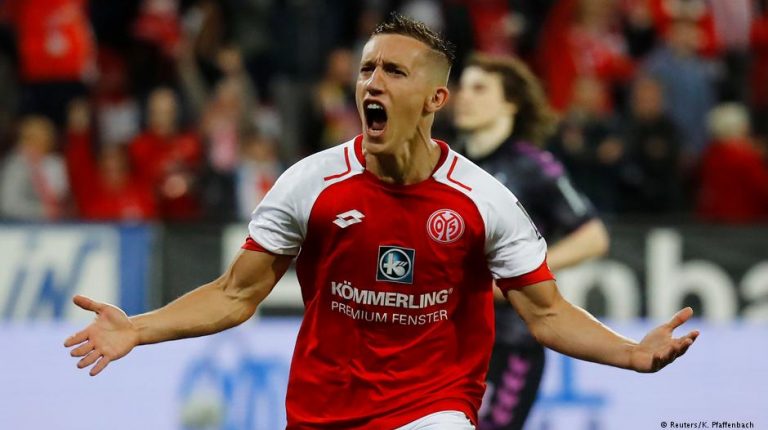 Mainz picked up a significant home win against Freiburg as they attempt to avoid the drop. Their victory came as a result of perhaps the oddest penalty decision in the Bundesliga this season.Mainz 2-0 Freiburg
(De Blasis 45+7′ pen., 79′)
Opel Arena, Mainz

One goal defined this relegation six-pointer between Mainz and Freiburg on Monday night, and it was an odd one to say the least.

It came just before the break when Pablo De Blasis converted from the penalty spot to give the hosts a halftime lead — but that was only half the story.

In the 45th minute, Freiburg’s Marc-Oliver Kempf handled a shot from Daniel Brosinski in the six-yard box. Referee Guido Winkmann initially allowed the game to play on, denying Mainz a penalty, before blowing for halftime shortly thereafter.

But while the players were walking back down the tunnel towards the dressing room, the video assistant asked Winkmann to look at the penalty call again. The referee then reversed his call and awarded Mainz a penalty and had to call the players from both teams back onto the field.

Finally, in the seventh minute of added time, De Blasis converted the penalty.

Footage from broadcaster Eurosport during the incident showed that players from both teams were already in their respective dressing rooms when Winkmann requested they return to the field. One Freiburg player could even be heard saying: “No, we’re not coming back out.”

In the second half, an error from Freiburg goalkeeper Alexander Schwolow gifted Mainz a second goal when he passed the ball directly to Robin Quaison in the penalty area. The Mainz forward then picked out his teammate De Blasis who slotted the ball home off the post.

The game itself may have been otherwise unremarkable, but that didn’t stop the fans from creating a spectacle of their own as they continued to display their displeasure with Monday night games.

Read more: ‘Football needs to decide what its fans are worth’

Before the game began, both sets of fans waved signs reading “against Monday games” and a cacophony of whistles and vuvuzelas provided a constant soundtrack throughout the 90 minutes.

It was so loud that Mainz coach Sandro Schwarz even said afterwards that it was distracting, while VAR project leader Lutz Michael Fröhlich even suggested the noise had hampered the referee’s ability to hear the video assistant on the crucial penalty call.

The start of the second half was also delayed by more than 10 minutes as fans twice threw toilet paper into one of the goalmouths.

Supporter protests have become commonplace in Monday night Bundesliga games as fans across the country have protested the unpopular scheduling. All five Monday contests this season saw some form of fan protest — from Frankfurt fans throwing tennis balls onto the pitch to Dortmund fans leaving their famous south stand vacant.

The protests in Mainz did not seem to affect the home team’s on field performance, as they did just enough to earn three crucial points towards their Bundesliga survival. Freiburg, meanwhile, have now lost three straight games and have been dragged closer to the drop zone.