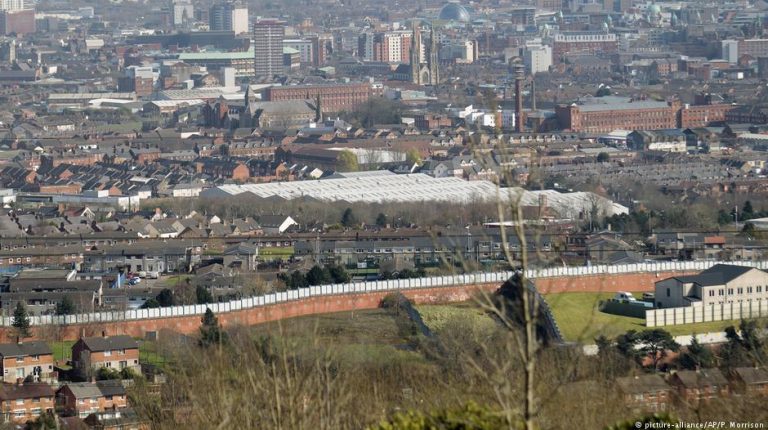 The Good Friday Agreement brought an end to Northern Ireland’s “troubles.” But the deal failed to offer a blueprint for dealing with a past that casts a shadow over the present, reports Peter Geoghegan from Belfast.On April 10, 1998, the Good Friday Agreement was signed in Belfast. Three decades of sectarian violence was finally coming to a close. Bitter enemies agreed to share power in Northern Ireland.

Then British prime minister Tony Blair spoke of "the hand of history" on the shoulders of its signatories: the governments in London and Dublin and representatives of more than half a dozen rival political factions. The deal was endorsed in referendums on both sides of the Irish border.

The Good Friday Agreement was expected to transform Northern Ireland. Twenty years on from that momentous accord, the guns are silent. Belfast has reinvented itself as a busy, modern city popular with tourists.

But Northern Ireland's peace can still feel uneasy. The devolved power-sharing government collapsed more than a year ago. Brexit has reopened old questions around sovereignty and nationhood.

Protestants and Catholics are still separated by 10-foot high "peace walls." The old divisions remain a daily part of life for many – including those who suffered most during the "troubles," the colloquial name for the 30 years of violence that cost around 3,500 lives.

"The [Good Friday] Agreement was supposed to mean that the war was over, that we would move across the barricades, that you didn't need to be afraid to go into certain areas. But that fear is still there," says victims campaigner Paul Gallagher.

Gallagher was just 21 when pro-British loyalist gunmen called at his family home in a majority Irish nationalist neighborhood in West Belfast. Gallagher was shot six times. He has never walked since.

Disagreement on what the past means for the present

Outside the window of the same house in which Gallagher was shot, Irish tricolors fly from lampposts. A few hundred meters down the road, the British flag flutters in the breeze. Violence at the "interface" is still relatively common, especially during the contentious summer Protestant marching season.

"Once the agreement was signed we needed to move on, but that hasn't happened in so many areas," Gallagher says.

Gallagher has spent years campaigning for pensions for the around 500 people permanently disabled during the troubles. Legislation has been passed to grant victims pensions but has been blocked by a row over what constitutes a victim.

Many unionists, in particular, oppose any definition of victims that includes former paramilitaries. But for others, including many Irish republicans, those injured fighting during the troubles are heroes who desire assistance.

Read more: Northern Ireland's fragile peace 'all about the border'

"I know republican ex-prisoners who you could see as victims. But other people would never see them as victims," says Alan McBride who lost his wife in an IRA bombing in 1993 and now manages the Wave Trauma Centre in Belfast.

Stephen Farry of the cross-community Alliance Party says that the issue of pensions for victims is a "small reflection" of a much wider disagreement between unionists and nationalists about what happened during the past, and what the Good Friday Agreement means.

"There is a battle going on to try to capture a narrative of what happened [during the conflict]," says Farry. "You are seeing different interpretations of the Good Friday Agreement."

Violence of a different kind

The Good Friday Agreement set out rules for how Northern Ireland was to be governed, mandating that nationalists and unionists share power in Belfast. But the 35-page text was largely silent on how to deal with the legacy of the troubles, a fact that some argue has contributed to a recurring focus on the past.

"For 20 years [legacy] issues haven't been addressed," says Tom Roberts, a former loyalist paramilitary who now runs a center for ex-prisoners. "At the time the agreement was signed there was a lot of euphoria. There was a generosity of spirit, but within the last five years a lot of that has disappeared. There is a different mind-set in the two communities now."

An estimated 30,000 people spent time in prison for paramilitary offenses during the conflict. Thousands were released in the 1990s under the terms of the deal. There is little sign of a return to widespread violence in Northern Ireland, but some former combatants are frustrated by the reality of life after the troubles.

"Violence is still happening, but it's the violence of poverty. Nothing has changed," says Robert Henry, a former Irish Republican Army (IRA) prisoner.

Henry, who spent six years in prison in the 1980s, joined the IRA as a teenager in West Belfast. "There was hero worship. Republicans were role models," he says. "My playground as a child became my battleground as an adult."

Two decades on from the agreement, Henry is disillusioned with Northern Irish politics. Like other ex-prisoners, he cannot get a job in the public sector and is barred from everything from home insurance to travelling to the United States. But his loudest complaints are reserved for his former comrades.

"What has the peace been for? In 20 years of self-government we can't point to one thing," says Henry.

The onetime IRA prisoner says that the republican party Sinn Fein has "no plan" for its ultimate aim, united Ireland. "We vote in our droves, but it's an anti-vote. It's us or them. I am getting to the stage where I won't vote Sinn Fein," he says.

Disillusionment in traditional republican and, particularly, loyalist areas is not hard to find. But an overwhelming majority of voters still back the most strident parties – a striking feature of Northern Irish politics since the agreement has been the collapse of moderate parties. In last year's general election, all but one of Northern Ireland's 18 seats was won by either the hardline Democratic Unionist party or Sinn Fein.

There is little prospect of a return to power-sharing between the DUP and Sinn Fein in Belfast. Britain's departure from the European Union has further hardened divisions: While most Northern Irish voters oppose Brexit, the DUP is firmly in favor.

The Good Friday Agreement brought peace, but Northern Ireland remains deeply divided. Nationalists and unionists "agreed a non-aggression pact," says Duncan Morrow, a professor of politics at the University of Ulster. "But we still have no deal on flags, on parades, on how to deal with the past. We still have no vision of a shared future."