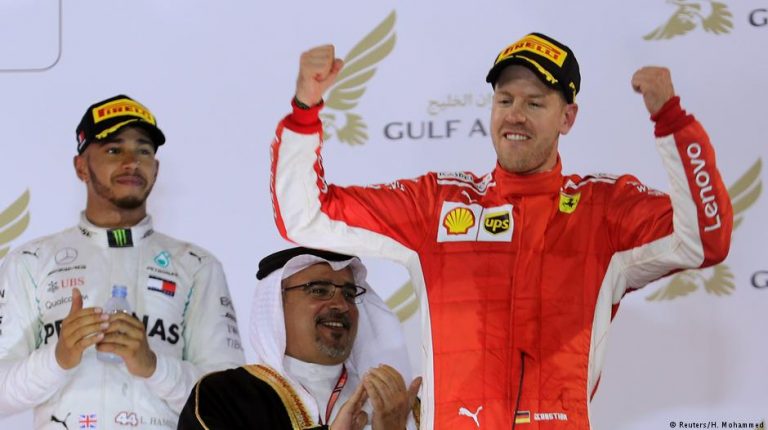 The four-time champion crossed the line with Valtteri Bottas on his tail and the Finn’s Mercedes team-mate Lewis Hamilton in third in a nail-biting finish to an intriguing contest.

It was Vettel’s second win in as many races this season and extended his lead ahead of Hamilton in the drivers’ championship after the Briton delivered a dazzling drive from ninth on the grid to finish only six seconds adrift.

Another superb drive by Frenchman Pierre Gasly took him to an unexpected fourth place for the Honda Toro Rosso team ahead of Dane Kevin Magnussen of Haas.

Vettel’s Ferrari teammate Kimi Raikkonen failed to finish after colliding with a mechanic at a pit stop while both Red Bulls driven by Max Verstappen and Daniel Ricciardo also retired.

Lap 57/57 Vettel is holding off Bottas, but the Finn is hot on his heels. Can he hold on? What a finish!

Lap 56/57 Bottas has slowed slight, but he#s now only a second behind. A massive final lap coming!

Lap 54/57 Less than two seconds between them now. Vettel is going to struggle to keep the lead here.

Lap 50/57 Hamilton is told to “keep your head down”. Mercedes’ only hope is that Vettel runs out of tyres.

Lap 48/57 Bottas has been instructed to go full throttle and pressure Vettel at the front. He’s now 5.7 seconds off the lead, with Hamilton another 11.9 seconds back.

Lap 45/57 “Sorry Lewis, I can just hear wind noise” is the response to Hamilton when he asks if he is doing enough. There’s never a good time for the radio to go down, but this is a terrible moment! Team strategy will be crucial to Hamilton having a chance to win this race.

Lap 43/57 Mercedes tells Hamilton it thinks Vettel might be staying out. Hamilton says he is “driving to target”. That presumably means he is hitting the lap times he’s been set.

Lap 41/57 Mercedes is “struggling with the radio” with Hamilton…

Lap 39/57 Hamilton is 19 seconds behind Vettel now. If the Ferrari pits, he’ll definitely come out behind Hamilton. This is not how Vettel planned it!

Lap 36/57 Raikonnen is out! What a calamity for the Ferrari driver!

Lap 35/57 Raikonnen pits and there’s chaos in the pit lane! He comes to a halt in the pits, and it looks like he hit a mechanic as well.

Lap 33/57 Vettel is due to run into some traffic soon.

Lap 31/57 Hamilton has shaved four seconds off the leader. He is now 21 seconds behind Vettel.

Lap 29/57 Bottas has the gap to Vettel down to 4.2 seconds now, but Raikkonen is now 1.6 seconds behind the Mercedes. Things tightening up at the front.

Lap 27/57 Hamilton pits and rejoins in fourth, 25 seconds behind Vettel. But the Ferraris are on a two-stop strategy so things could get interesting later.

Lap 23/57 Bottas has come in and rejoins on the medium tyre. The Mercedes are on the softs, which suggests a one-stop strategy for them, whereas the Ferraris will probably stop twice.

Lap 21/57 Raikonnen pits too, but Bottas stays out there.

Lap 20/57 Vettel pits. He rejoins in fourth, well clear of the traffic.

Lap 18/57 Hamilton is less than six seconds behind Raikkonen now in what will soon shape into a battle for third.

Lap 16/57 Bottas has recorded another fastest lap! He’s eaten into the lead a little more. Just 2.4 seconds behind now.

Lap 14/57 Bottas was quicker than Vettel on the last lap. That’s cut Vettel’s lead to 2.8 seconds.

Lap 11/57 The camera onboard Ricciardo’s Red Bull suggests the car just shut down. Somewhat concerning for the Red Bull team.

Lap 10/57 Vettel is three tenths of a second per lap faster than Bottas at the moment, and that’s bad news for Hamilton (and Bottas!).

Lap 9/57 “No further action” taken over the Verstappen/Hamilton collision, the word from the stewards.

Lap 8/57 Vettel is two seconds clear of Bottas at the front.

Lap 7/57 Hamilton is climbing through the field. He started in ninth but is already up to fifth, having just passed Magnussen. But he remains 13 seconds off the lead.

Lap 6/57 Verstappen has stopped! That means both Red Bulls are out already.

Lap 4/57 Verstappen has to pit. He gets a tyre change and is back underway.

Lap 3/57 Contact between Hamilton and Verstappen! Elsewhere, Ricciardo is out and the virtual safety car is out. All going off here.

Lap 1/57 Bottas takes Raikonnen on the opening bend to take second! A comfortable start for Vettel up top, but Magnussen and Hulkenberg came together.

16:45 — Fifteen minutes to go until lights out in Bahrain.

16:08 — Today is Sebastian Vettel’s 200th grace in Formula One! He is looking for his 57th race win in his career in Bahrain.

16:05 — Defending drivers’ champion Lewis Hamilton starts ninth on the grid after picking up a five-lap penalty for a technical problem.

16:04 — Ferrari has the best spots on the grid today after impressive qualifying runs from Sebastian Vettel and Kimi Raikkonen. Here is the grid…