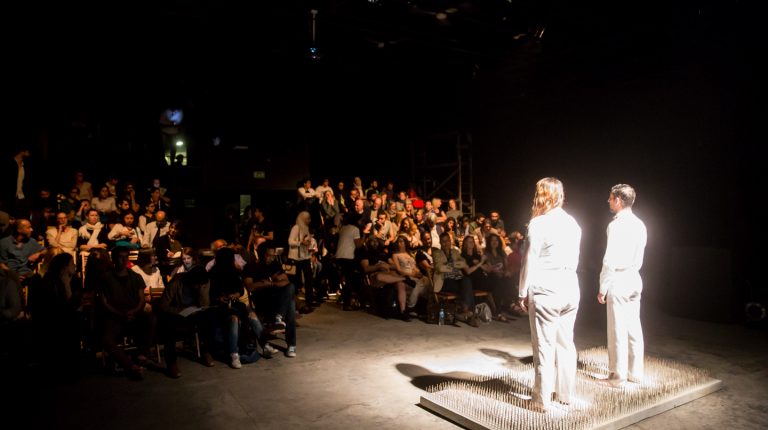 In a dimly lit room, where the surrounding black walls invaded one’s soul, leaving attendees alerted with frustration and apprehension, only two performers under bright yellow spotlights, standing still, welcoming attendees with emotionless faces and what looks like soulless bodies, started the journey of time travel to Egyptian daily lives before the 25 January 2011 revolution.

Before the Revolution is a 40-minute show, which draws the lines of frustration, agony, and despair that Egypt had witnessed before the revolution, leaving the audience to connect and build between the events that had led to a mass uprising.

The performance is part of the Downtown Contemporary Arts Festival (D-CAF)’s programme.

Written by Egyptian artist Ahmed Al-Attar, and performed by Ramzy Lehner and Nanda Mohammed, the show brings audience a glimpse of events that portrayed Egyptian personalities and insistence of protesting against former president Hosny Mubarak’s regime.

In Downtown’s Rawabet Theatre, with emotionless faces, loud voices, and frozen bodies, Lehner and Mohammed recalled some of the political, social, and economic conditions of Egyptians from different social classes and ages. In a press release, Before the Revolution was described as a play which “places audiences in an emotional and intellectual moment by portraying the stagnation before an inevitable eruption.”

The show starts with the recitation of people’s names, who the audience cannot tell who they are or why their names were told with their ages and addresses. Jumping from one topic to another, the audience remained for a while unaware before recognising the theme of the performance, as it clearly revealed that the recalled people are those who innocently lost their lives out of negligence by the authorities.

“With a more experimental format, the play’s aim is to transport audiences to an alternate state, allowing them to better understand not just the causes that led to the revolution, but also the event itself, the times that came after it, and the future that stemmed from it,” the brochure read.

Despite quick plot transitions, the stories took the audience from one scene to another smoothly to bring them the life of those whose stories were being told.

From the famous Al-Ayat train accident in which the train was set on fire on its way from one town to another in Upper Egypt, the names of some of the 1,000 people who were burned alive were told as the train was carrying families going to their hometown on the night of Eid Al-Adha.

The story of Egyptians who drowned in Al-Salam passenger ferry in 1998, which had sunk leading to an unknown number of deaths, was recalled soon after. Despite the emotionless faces of Mohammed and Lehner, their words brought the audience to experience various emotions, ranging from laughter to being on the verge of tears; all within seconds.

With Islamic and Christian prayers, Al-Attar perfectly drew such a dilemma and labyrinth that people usually spend their lives trying to overcome, and moving forward to Egyptians’ main passion: football.

In the brochure of the show, Al-Attar wrote that the inspiration for the play came from all the Islamic speeches he had heard or famous preachers, as well as the fan songs of the Ultras of Al Ahly and Zamalek football clubs.

From one scene to another, the plot completes the image of people’s aggression that came from their surrounding atmosphere; the maid who is forced to stay at a job where her employer sexually hrassed her and forced her into sexual actions while forcing her to pretend she was pleased, the couple who were in the midst of an ugly divorced which reflects the pressure they were surrounded with, and people in authority who control human beings’ lives; the play completes with the urge that an explosion had to come to bring change.

The play was cancelled for the first two days of the show, based on the request of censorship authorities to remove five scenes from it, which—according to the founders—would have had a “negatively strong impact on the dramatic construction and the storyline, draining its artistic and literary content, and making it difficult to premiere the play in this distorted way.”

The play’s music is by Hassan Khan, set and costume design by Hussein Baydoun, and the light design by Charlie Aström.

While Al-Attar had expressed his excitement at viewers’ reactions towards the show, as the performers were overwhelmingly greeted with clapping mixed with tears from the audience.

The show was also performed in October 2017 in France, Belgium, and Switzerland, and toured several festivals and theatres.

D-CAF to open with all-women line-up