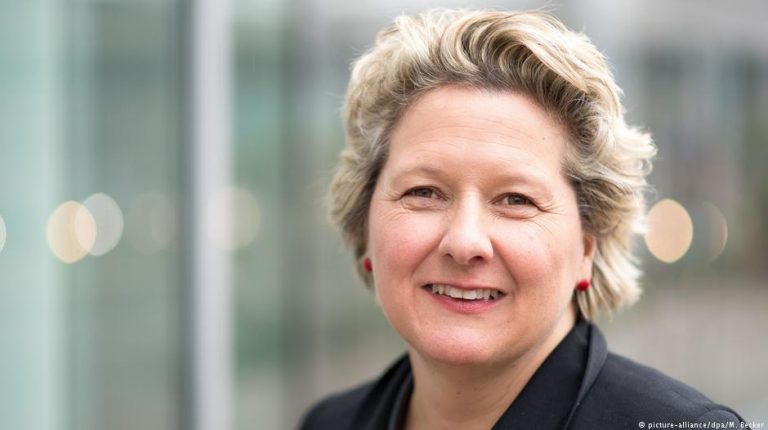 Svenja Schulze is a surprise choice as Germany’s new environment minister. She is not known as an environment expert and has governed only at federal state level. Trouble ahead?Germany’s new environment minister Svenja Schulze is not exactly well-known up to now. When it was announced that she would take over the Ministry of the Environment, Nature Conservation, Building and Nuclear Safety under Merkel’s new government, hardly anyone outside of the western state of North Rhine-Westphalia knew who she was.

Schulze was minister of innovation, science and research in Germany’s most populous state until her party lost the election in June 2017. During that time, she made very little impact at the national level. As a regional state politician with a focus on education policy, she was a surprising choice for federal environment minister.

“She’s a bit of an unknown quantity,” Uwe Jun, a politics professor at Trier University in southern Germany, told DW. “So far I haven’t seen her focus on any environmental topics at all.”

The only time Schulze had any contact with environmental policy was from 2005 to 2010, when she was spokeswoman for environment issues for her party, the Social Democrats (SPD), in North Rhine-Westphalia’s state parliament.

Moving from state to federal level

Schulze’s work as part of her state’s cabinet was contentious at times. Back in 2011 she hit the headlines when she announced that fuel elements from a nuclear test facility had disappeared, causing considerable alarm in the wake of the Fukushima disaster. This turned out to be a false alarm, but Schulze’s reputation suffered as a result of what was termed a communication error.

As research minister, she got rid of mandatory seminar attendance for university students, drawing the fire of lecturers.

“Her education policy was partly to blame for the SPD’s bad results in the 2017 state election,” Jun said.

Still, she is considered to have forged deep connections in the powerful North Rhine-Westphalian SPD. She’s been in state politics for 20 years, focusing on issues at the left end of the political spectrum.

“She has always presented herself as a front woman of the left,” Jun said. “That has helped her career.”

Just the right woman for the job

When SPD chairwoman Andrea Nahles was filling the cabinet posts assigned to her in the “grand coalition” with Angela Merkel’s conservatives, she was looking for a left-leaning, female politician from North Rhine-Westphalia — and Svenja Schulze was the perfect candidate.

“There aren’t many people that perfectly fit this description,” Jun said.

Schulze’s long political experience in North Rhine-Westphalia helped her to get the job, but could actually become a problem on the federal level. After all, she hails from a state where lignite or “brown coal” still plays a big role.

“She’s represented the SPD in North Rhine-Westphalia, a group that still believes in counting on lignite,” SPD-expert Gero Neugebauer from the Free University of Berlin told DW. “That makes sense because people there who traditionally vote SPD work in the lignite sector or support it.”

But as a federal minister, Neugebauer says, Schulze has to work for the good of all German citizens and can’t cater to one state’s interests.

Sticking with lignite or supporting sustainability?

There’s also concern about Schulze’s ties to the coal lobby. Shortly after it was announced that Schulze would head up the environment ministry, Greenpeace Germany came forward criticizing her membership in the mining union “IG BCE,” which advocates keeping coal power plants running longer.

The environment activists say that Schulze must prove her independence quickly.

“We’re going to be watching closely to see whether Schulze follows the tradition of her state’s SPD as a coal party, or whether she’s part of a new generation,” Greenpeace climate expert Tobias Münchmeyer told DW.

But being a member of IG BCE doesn’t necessarily denote a coal-friendly attitude. Schulze’s predecessor Barbara Hendricks is a member as well, and she isn’t known for catering to the coal lobby.

Another thing to note: Schulze is not only a member of IG BCE, but also of Germany’s Nature and Biodiversity Conservation Union (NABU). For Antje von Brook, climate protection expert from the German Federation for the Environment and Nature Conservation (BUND), that’s not a contradiction.

“Schulze has a background in conservation and is well-versed in how things work on the business side, too” von Brook told DW. “We hope she can use this, as well as her contacts in the coal industry and in the unions.”

Schulze herself appears to be conscious of her responsibility to merge industry interests with sustainability demands — at least in her home state.

On her website, she states that she wants to closely link up “ecological responsibility and economic reason with social justice” in North Rhine-Westphalia.

Schulze’s biggest challenge will be tomake this connection work not only on the state level, but to carry it over into national politics as well.

Egypt demands action from UK over death of Egyptian student