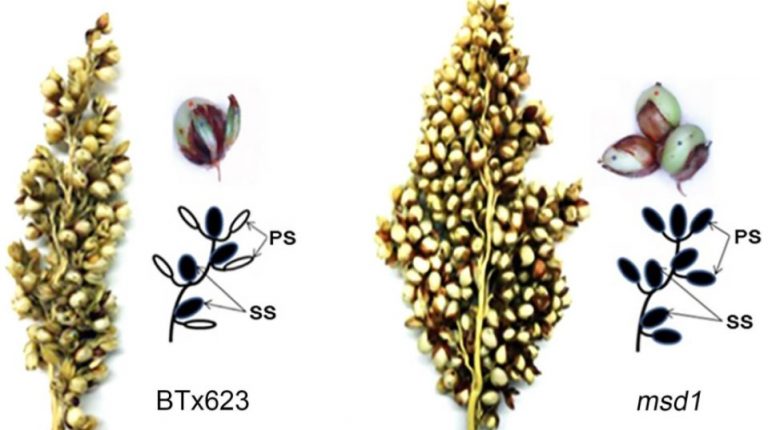 Pointing toward a strategy for significantly increasing the yield of various grain crops, scientists at Cold Spring Harbor Laboratory (CSHL) found a simple genetic modification which could triple the grain number of sorghum.

Sorghum is a drought-tolerant plant that is an important source of food, animal feed, and biofuel in many parts of the world, particularly amid the increasing concerns over global food security and the increasing demand on crops because of the growing human population and a changing environment.

In their research, scientists Doreen Ware, a CSHL adjunct associate professor, research scientist with the US Department of Agriculture’s Agricultural Research Service (ARS) and the lead author of the study, and together with ARS colleague Zhanguo Xin, have revealed how that genetic change boosts the plant’s yield by lowering the level of a key hormone, that leads to generating more flowers and more seeds.

The study, which is published in the journal Nature Communications, was focused on high-yield strains of sorghum that were generated several years ago by Xin. An unknown genetic mutation introduced by chemical mutagenesis resulted in an increase in the number of grains and seeds contained within fruits that each plant produced. Mutagenesis is a method used for many decades by breeders and researchers to induce genetic variations in plants.

Like many cereal crops, sorghum grains are produced in clusters of flowers that develop from an elaborately branched structure at the top of the plant called a panicle. Each panicle can produce hundreds of flowers. There are two types of flowers, and usually only one of these, known as the sessile spikelet (SS), is fertile, according to the study. The other flower type, called pedicellate spikelets (PS), do not make seeds. In the modified plants co-author Xin produced, however, both sessile and pedicellate spikelets produced seeds, tripling each plant’s grain number.

Aiming at understanding what caused this dramatic change in the plant, the researchers found—by completely sequencing the genomes of the modified plants—that the key mutations affected a gene that regulates hormone production. The study points out that plants carrying the mutation produce abnormally low levels of a development-regulating hormone called jasmonic acid, particularly during flower development.

Through subsequent experiments, the researchers found that jasmonic acid prevents pedicellate spikelets from producing seeds. “So when the plant hormone is low, we get seeds set on every single one of the flowers. But when the plant hormone is high, we have a reduced number of fertile flowers, ending up in a reduced number of seeds,” said Yinping Jiao of CSHL’s Ware lab, co-first lead author on the new paper, according to the CSHL press release of the CSHL.

After uncovering the biological changes that could triple sorghum’s grain production, the researchers hope to apply the same strategy to increase grain production in related plants that are vital in the global food supply, such as rice, corn, and wheat. “The knowledge will help guide crop improvement through traditional breeding practices as well as approaches that take advantage of genome editing technologies,” said the lead author in the statement.

Previous attempts were exerted for increasing the production of several crops, such as wheat. One of those attempts is a pioneering new technology which is set to accelerate the global quest for crop improvement in a development which echoes the Green Revolution of the post-war period. According to the paper published in Nature Plants recently, the new method “speed breeding” achieved a wheat generation from seed to seed in just eight weeks.

It typically takes 15 to 20 years to breed a new superior crop variety. One of the bottlenecks in traditional breeding is the number of generations that can be cycled through in a year. One of the cornerstones of the Green Revolution in wheat in the 1950s and 1960s was the introduction of shuttle breeding, which allowed breeders to grow two generations of wheat in a year, lead author of the study Brande Wulff of the John Innes Centre, Norwich, explained.

Wulff told Daily News Egypt that with speed breeding, we can now achieve up to six generations of wheat in a year, and breeders will therefore be able to more rapidly cross a certain trait of interest into a high-yielding elite cultivar. He added that many disease resistance genes can be found in wild relatives of our domesticated crop plants. “You would starve to death if you depended on wild wheats for your daily bread! And crossing a disease resistance gene from a wild wheat into a domesticated elite cultivar is like breeding a race horse with a donkey! It takes many, many years of backcrossing to combine the best of both worlds.”

The lead author stressed that speed breeding can accelerate this process and shorten the time required to develop a new wheat cultivar with superior traits.

“Wheat is the most important cereal crop in Egypt where it provides 30% of the population’s calorie intake. More than 1.4m hectares are farmed for wheat, equivalent to 30% of cultivated land in Egypt. The total annual production, nearly 9 million tonness, provides just over 50% of the national consumption,” said Wulf.

Meanwhile, a previous study which was published in the Industrial Crops and Products journal, sees a future in which we convert sorghum to biofuel, rather than relying on fossil fuels.

The bioenergy crop sorghum holds great promise as a raw material for making environmentally friendly fuels and chemicals that offer alternatives to petroleum-based products, according to the Genetics Society of America. Sorghum can potentially yield more energy per area of land than other crops while requiring much less input in terms of fertilisers or chemicals.

Scientists at the University of Florida found three UF/IFAS-developed sorghum varieties that could produce up to 1,000 gallons of ethanol per acre. Ethanol produced from sweet sorghum can be used for auto and jet fuel, according to the paper.