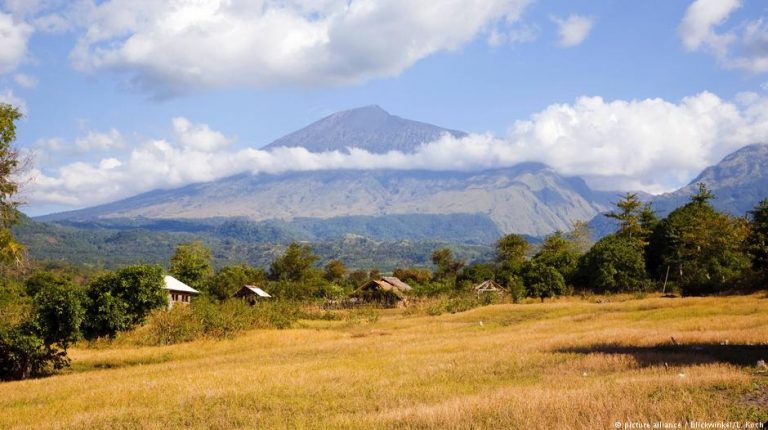 Mount Rinjani dominates the landscape on the small Indonesian island of Lombok. It’s a paradise for trekkers – but as an active volcano, Rinjani can be dangerous, reminding locals and visitors alike of nature’s power.At 3,726 meters tall, Mount Rinjani is the second highest volcano in Indonesia, after Mount Kerinci on the island of Sumatra.

Rinjani’s beauty has made Lombok a center for eco-tourism, with the volcano a popular destination for intrepid hikers. But an increase in the number of visitors on Rinjani has also led to environmental problems, as tour groups fail to take their litter back down with them.

Those climbing to its rim are rewarded with stunning views of the crater lake Segara Anak. The name means ‘child of the sea,’ a reference to the intense blue color of the lake. Hot springs can also be found in the volcano’s caldera – a deep basin, shaped like a cauldron, which can form when large volumes of magma are erupted in a short time.

During Rinjani’s last eruption in 2016, ash plumes rose almost 10km from the summit, and planes in and out of the country were cancelled when clouds of ash drifted over to Bali, west of Lombok island.

Indonesia is home to more than 120 active volcanoes – and the country is prone to seismic upheaval due to its location on the Pacific ‘Ring of Fire,’ an arc of volcanoes and fault lines encircling the Pacific Basin.

Just this month, Mount Sinabung, a volcano on the island of Sumatra, erupted, blowing away much of the mountain’s summit. No one was injured.

Despite the dangers, the volcanic landscape provides a unique habitat for a wide variety of flora and fauna. Lombok is home to the Rinjani Scops owl, the only bird species endemic to the island.

It was first discovered in 2003 when researchers noticed its distinctive whistling hoot, which distinguishes it from other owl species in the region.

Do you have a picture of a beautiful landscape or something amazing in nature that you want to share with our readers? If so, you can send it to us using the upload tool on our website, or by emailing us at ecoafrica@dw.com. We look forward to hearing from you!