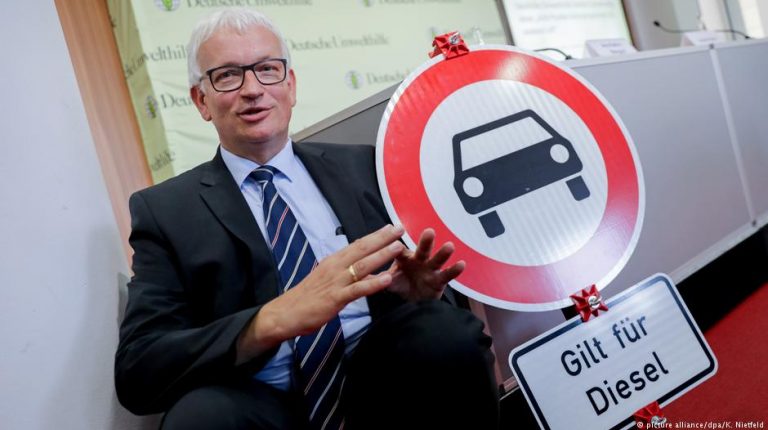 Germany’s highest administrative court has delayed until next week a ruling whether cities can ban heavily polluting diesel cars to improve air quality. A ban would potentially hit 15 million diesel cars in Europe.Presiding judge Andreas Korbmacher said on Thursday that the court “wants to deliberate very thoroughly” on the question, adding that the ruling would be announced on Tuesday. While a decision from the Federal Administrative Court in Leipzig in favor of anti-pollution plaintiffs would not order any vehicles off the road, it could open the way for cities to do so in zones where the air is particularly contaminated by diesel exhausts.

In many German cities, the air is simply too dirty. But this is nothing new. For years, harmful emissions have exceeded permitted levels and led to high concentrations of toxic nitrogen oxides. They irritate the respiratory system and can cause cardiovascular diseases, lung problems and in many cases premature death.

These pollutants are mainly released by diesel engines. In cities, “three quarters of the nitrogen oxide emissions come from diesel cars,” explains Helmut Dedy, head of the Association of German Cities.

Since the emissions control systems in many diesel-powered passenger cars don’t work as required, cities are now struggling to comply with clean air legislation to protect the health of their citizens.

“Without changes to the vehicles, the limits can not be met,” Dedy told DW. Adding: “If there are no lasting changes to diesel passenger cars, I’m skeptical that we can avoid driving bans.”

What is the actual issue?

It all began when the environmental and consumer watchdog Environmental Action Germany (DUH) brought legal cases against the states of Baden-Württemberg and North Rhine-Westphalia, because pollution levels in Stuttgart and Düsseldorf massively exceed allowable levels.

In response, a court in Stuttgart called driving bans the “most effective” measure available and said the health of people was more important than the rights of diesel drivers. The Düsseldorf court said that diesel driving bans in the city would have to be examined in detail.

But both states were skeptical about whether driving bans are actually legally possible and therefore appealed to the higher administrative court in Leipzig. Now these judges must decide if there is a real legal foundation for implementing driving bans.

What impact could a decision have?

The verdict will be a signal for citizens, cities, diesel owners, politicians and carmakers throughout Germany and Europe. If the court decides that driving restrictions for diesel vehicles have a legal basis in order to control air pollution, the relevant authorities will be given a tool to take appropriate measures in areas with particularly bad air and prohibit certain diesel vehicles.

“It can’t be expected that the signs will go up the next day — such things don’t happen overnight,” said Remo Klinger, a lawyer who is representing DUH. “First, the so-called clean air plan must be changed. Driving bans must be included in this plan and the public must be given the chance to comment again. So far the courts have given a timeline of around six months for implementation.”

If the judges consider driving bans on diesel vehicles inadmissible, the authorities would not have this option for air pollution control without changing the underlying laws.

But in this case, Dedy still sees important issues that will need to be answered: “How can I make sure that the [pollution] limits are met at a certain point in time, and the political debate will again boil over. Then you have to answer that question.”

For this reason, it does not really matter to him which way the judges decide. What is most important is “that the government decides on a coherent and overall concept with us and says they want to go there. After all, it’s about protecting health,” says Dedy.

Whatever the decision, it is expected to bring a new dynamic to the diesel scandal and the legal codification of air pollution controls. The German Environment Agency (UBA) has already announced that software updates for diesel cars are not enough and other measures such as the expansion of public transport do not sufficiently improve air quality. “We need a solution in the vehicles — the hardware solution,” says Dedy.

Even a recent analysis by the Center for Automotive Research at the University of Duisburg-Essen concluded that “it is impossible to comply with nitrogen dioxide limits in urban areas without hardware modifications.”

The motoring club ADAC Baden-Württemberg also found that retrofitting exhaust systems works and can be implemented promptly with the support of manufacturers. The government’s recent idea to possibly finance the retrofitting with taxpayer money has been met with a lot of criticism. Dedy is vehement that retrofitting is the responsibility of the car industry.

In addition, according to Dedy, cities would need to mark vehicles with a ‘blue badge’ to identify the least polluting models. Diesel vehicles which were retrofitted accordingly and thus complied with exhaust limits could get such a decal as well.

“From my point of view, this blue sticker is also smart for the industry because it ensures that this technology actually has a future if it would only emit the low quantities of nitric oxide as required,” says Dedy.