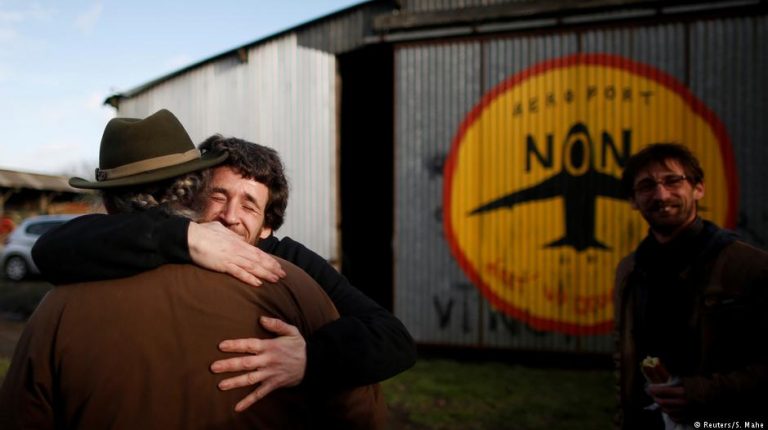 After 50 years of resistance, the French government has abandoned its plans to build a new airport in western France. DW discussed the recently announced decision with an activist at the squatted site.The French government on Wednesday announced it is abandoning plans to build a new airport in Notre-Dame-des-Landes in western France. French Prime Minister Édouard Philippe said that the hundreds of campaigners living at the site of the proposed airport should leave before the end of March. If they don’t leave voluntarily, the government said it is prepared to forcibly evict them.

But the activists are not ready to leave behind their “zone to defend” (or ZAD, for its acronym in French). Over the last decade, they say they’ve built a community of about 300 people including a herd of cows, a bakery, a radio station and a climbing wall.

DW discussed the new decision and the future of the land with one of the activists living there, who introduced herself as “Camille.”

DW: You’ve been very involved in the opposition movement against the airport in Notre-Dame-des-Landes. What has this whole process meant for you?

Camille: The whole fight has been really exciting and full of enthusiasm, but it has also being a long process of difficulties and conflicts to be overcome. The most gratifying to me has been to see so many groups of different people with different ideas and political backgrounds come together and fight for a common cause. We’ve learned together how to resist such a project, and how to make the idea of cooperative living a reality at ZAD.

We are now experiencing a historic victory. It is not common to see such victories over mega-projects like this one, and we hope our success will serve as a support for other fights in the world.

The decision to abandon the project comes after 50 years of opposition. What have been the key reasons for this decision?

Right after Macron was elected, his government launched a mediation process. On my opinion, it was a way of giving some time to the decision-making process and cooling down the problem. In other words, the government wanted to show that they were taking some action, but without actually making any decision.

The report from the mediators has finally presented abandonment of the project as a viable option based on a technical report. It has been the best way they could have ended this conflict.

While this project has been abandoned, other airports of the region will be expanded. To what extent does it make sense from an environmental point of view?

Building from zero is always more destructive, particularly on lands that have been preserved for so long. The land remains very useful for sustainable agricultural practices, and it is also home for a very large wetlands in the north. The simple act of creating new entrance roads to the area, for instance, would have had a terrible impact.

It is not only about the airport itself, but about all the infrastructure that would have been built around it. Enlarging the capacity of other airports will require less energy and less destruction than building a new one on this land.

Hundreds of people like you have been living there for years. What are you now planning to do now?

We will continue with what we started many years ago, living here in all our different ways. We have cultural, social and agricultural activities that we want to keep here. We produce our own food and share it with others, we perform concerts; we have a library, a rap workshop, a climbing wall, herds of cows, buckwheat crops, artisanal bakers, and so on.

This space enables us to experiment with a new way of living in a community, creating an alternative way of life than the conventional lifestyles leading to the worldwide economic, social and environmental crisis we are experiencing. We want this space to be a world far from individualism, and based instead on solidarity and sharing.

But the government wants you to leave. How will you react?

The movement against the airport supports people who have been living and defending this land over the past years, and believes they have the right to stay here if they want to. And based on what we’ve understood from the government’s statement, there could be an option for that. We will discuss it together, and try to find a solution in order for us to stay here and keep our social experiment.

For us, there is no final conclusion for now — but if there were an attempt to evict, the movement will be ready to react and oppose it. We hope we won’t have to face this, and that we’ll find a solution to keep going what we’ve started.

The interview was conducted in French by Irene Banos Ruiz, and has been condensed and edited for clarity.

The interviewee has not used her real name, due among other reasons to concern over potential legal consequences.