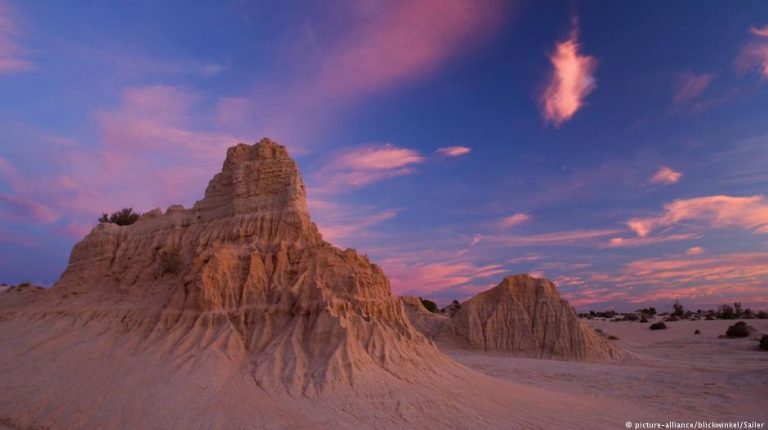 Resembling arid lunar landscapes, the ancient Willandra Lakes Region was once abundant in life and water. Now dried up, the lakes have yielded fascinating glimpses into Ice Age life, and still host a variety of animals.Now dry plains with alien-looking formations rising out of it, the ancient waterways of Australia’s Willandra Lakes Region once supported a lush ecosystem. Around 18,500 years ago, they dried up after the creek that once fed them stopped flowing – but left behind valuable archaeological insights, including the oldest human remains in Australia.

The unusual clay and sand formations resembling a lunar landscape started to take shape through prevailing winds when the lakes were full of water. Over thousands of years, the waters and wind washed away sand and soil, creating the formations, including the striking major tourist attraction the Walls of China found within Mungo National Park.

Animals also played a role in creating the formations. Hundreds of thousands of sheep, which grazed across Lake Mungo and the dunes in the late 19th and early 20th centuries, and introduced rabbits destabilized the dunes that created the Walls of China.

This erosion revealed some archaeological surprises. The Willandra Lakes Region is littered with fossils, including those of giant marsupials that once roamed the continent.

In 2003, the world’s largest collection of fossilized human footprints – more than 530 dating back 20,000 years – was discovered. The visible traces of the men, women and children who once walked over the lakeshores provides a rare insight into Ice Age life.

In 1974, the region was the site of a famous discovery: the 42,000-year-old Mungo Man, the oldest human remains in Australia, revealed that Aboriginal people had lived on the continent for much longer than experts had previously thought. The cremated remains of Mungo Lady, found in 1969 in the region, is among the world’s earliest evidence of complex funeral rites.

Despite its arid environment, the five large dry lake basins, together with the 14 smaller basins which make up the Willandra Lakes Region, still play host to a variety of wildlife. Herbs, grass and shrubs live on the dunes, while bats, reptiles, parrots and amphibians also call the region their home.

Being designated a UNESCO World Heritage site in 1981 helps protect the abundance of history and its delicate environment for generations to come.

Do you have a picture of a beautiful landscape or something amazing in nature that you want to share with our readers? If so, you can send it to us using the upload tool on our website, or by emailing us at ecoafrica@dw.com. We look forward to hearing from you!