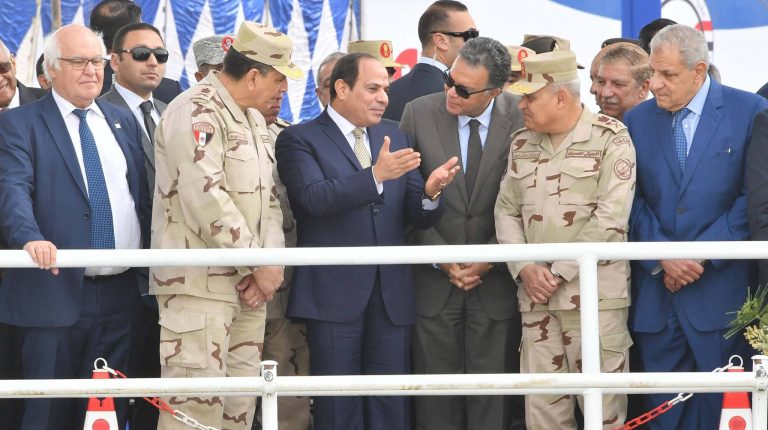 The Ministry of Health and Population and the Armed Forces Engineering Authority are assigned to build new integrated national projects to be implemented within two to threee years, President Abdel Fattah Al-Sisi said during the inauguration of developmental projects in New Ismailia city on Saturday.

He also announced the construction of a new city in Bir al-Abed village in North Sinai, which will cost EGP 100bn and will be completed within two years.

Al-Sisi inaugurated the Ahmed Mansi floating bridge in the Suez Canal, along with a zone east of the Suez Canal. Mansi is one of the military officers who were killed in a major attack in North Sinai on 3 July.

Mansi’s bridge will contribute to facilitating movement of citizens from east and west of the canal and provide the necessary infrastructure for the new urban communities in the east of the canal, especially in the New Ismailia city, in addition to linking Sinai with other provinces to support the ongoing development projects in the region.

The president also gave the start signal to run Abanoub Girgis Bridge in El-Qantara. The other development projects included the New Ismailia City project and the fish farming project in the eastern part of the canal with a capacity of 4,441 aquariums for the cultivation of high-quality marine fish.

Moreover, the president celebrated the arrival of the vessel Ahmed Fadel, which will participate in the discovery of gas and oil fields and will help the government to launch a number of mega projects in the field of fast trains to link the east of the country to the west for the first time, as well as urban communities and new cities, and entire governorates with the New Administrative Capital.  During his speech at the inauguration, Al-Sisi said the state is taking large sums from banks to develop the Cairo metro and buy equipment worth EGP 10bn, adding that current ticket prices are insufficient and indicated they could rise more than three-fold.

He also said that it was planned to conclude the Suez Canal tunnels currently under development in 12 years—each one in four years. “We began to contract drilling machines in November 2015 and began to work in 2016, which is a year or a year and a half,” he stated, adding, that on 30 June 2018, the tunnels to Sinai should be completed, saying that this is the current challenge for the state.