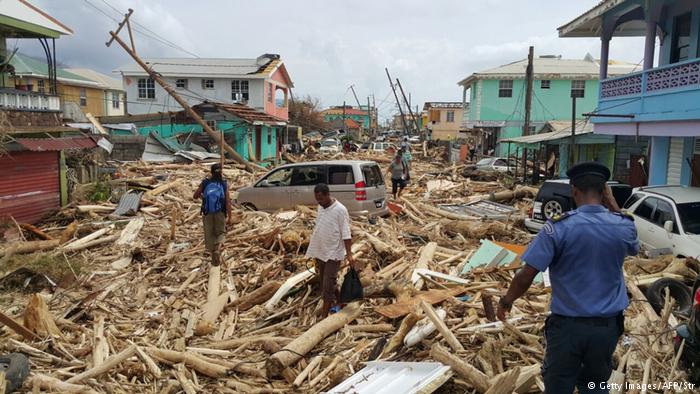 When Hurricane Maria raged across the Carribean earlier this year, a group of German students had no idea they would become involved in the ongoing clean-up. But three months later, that’s exactly what happened.I guess not many of you have ever been confronted with a hurricane, and I hope you never will. On our trip with Ocean College we have now crossed the Atlantic and arrived in Dominica, a Caribbean island that was a victim of Hurricane Maria at the end of September this year. It arrived there as a stage two storm and later turned into stage five.

The damage was visible from afar. All the trees have lost their tops or have almost no branches with leaves left. The image of a tropical forest was gone. The roofs of many houses have been blown away and are now under construction.

When we went on a hike with two Rastafarian guides to the Boiling Lake, the path we took through the jungle hadn’t been used for three months. One day ealier, they had sent someone to make the path free to walk along but there were still lots and lots of branches, stones and tree trunks lying across it. In some places, we had to leave the path because it was completely destroyed.

The guides told us about some survival tricks the Rastafarians used when were running from the police through the jungle and also taught us about the healing qualities of the mud we found in a boiling hot stream. The water in the stream was so hot that we could cook eggs in it.

After the hike we were picked up by three little buses that drove us to a small village where we would stay for two nights. During the ride I talked with Gordon, our driver. He told me that 17 people in his village, including his son’s best friend, were killed in the hurricane. We passed a school bus that had been hit by a huge tree – an image that won’t leave my mind. He also told me about his memories of the night, about how frightening it was to hear the wind blowing.

The ride took about two hours and when we arrived at the village it was already dark. The road that once led there was covered with big rocks and more branches so we had to walk the last bit. We had dinner in the ruins of one of the destroyed houses and then put up our tents.

In the morning, when I stepped outside, it hit me. There was so much damage. There were about three houses that had been completely destroyed so all that was left was the floor. The rest had been blown away. The water pipe was also gone, so we had to walk to get water and clean the dishes in the river nearby. You could even see parts of roofs in the forests on the hills surrounding us. I later was told they were blown there from the village behind one of the hills.

After lunch we helped to clean up a bit and carried some furniture out of one of the destroyed houses. One of the people who had lived there told us the hurricane was similar to a living thing and said it had felt as though he was being grabbed and thrown by the wind as if it were alive.

Lisa is one of the pupils taking part in the Ocean College voyage across the Atlantic and back.