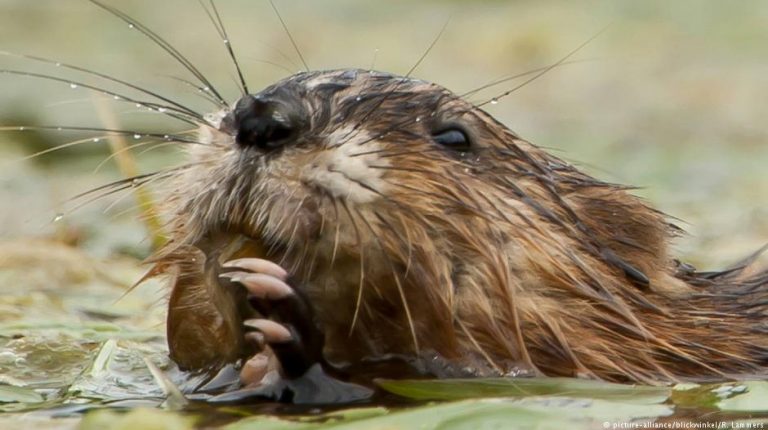 Canada’s mounted police have long kept out the bitter cold with muskrat fur. Traditionalists treasure their hats as the heritage of a country that built its wealth on the fur trade. But is it time to go cruelty-free?Clara Klein, one of the few furriers left in Ottawa, works out of a basement workshop draped in animal pelts.

Having been in the business half a century, Klein has seen fashions in fur change and change again. These days, fox and wolf work for hats or trimmings, but are out of favor for coats because they’re too bulky, she says.

“Naturally the mink is the most popular,” Klein adds. But there is a cheaper alternative. She puts a stack of grey-brown muskrat pelts down on the workbench. “The muskrat has a long history in Canada because it was an easily-accessible trapping fur and not expensive.”

A large semi-aquatic rodent native to North America, the muskrat has a pelt perfectly designed for Canada’s bitter winters, when the temperature can fall to -40 degrees. It’s light-weight, warm and even water-repellent, Klein explains: “When you get caught in snowstorm or rain, you just shake it off.”

The Mounties’ U-turn on fur

Two years ago, the RCMP gave in to pressure from animals rights activists and announced plans to drop muskrat hats in favor of synthetic alternatives. But then it reversed its decision.

In field testing, “artificial fur did not stand up to exposure to the elements (particularly rain), or provide the same level of warmth in extreme winter conditions,” the RCMP said.

And so the Mounties put in an order for 5,000 new muskrat hats. With three pelts going into each hat, animals rights activists see the Mounties’ backtrack as condemning 15,000 animals to a brutal death.

“It takes them an especially long and agonizing time to drown to death. It can take many, many minutes for muskrats to die underwater.”

The RCMP insists their hats are made only from fur obtained using “legal and humane methods.”

Pierre Canac Marquis, trap research coordinator for the Fur Institute of Canada, says methods have improved over the last three decades and Canadian hunters mostly use a rotating jaw trap akin to “a big mouse trap” that snaps the animal’s spine, killing it “within seconds.”

Labchuk isn’t reassured. “There is no humane way to kill and skin an animal for fur which is a vanity product that nobody needs,” she says.

But whether the Mounties should give up the century-old tradition of muskrat hats raises fierce passions on both sides of the debate.

Robert Sopuck, a Conservative Member of the Canadian Parliament — and keen hunter — was elated the Mounties decided to stick with tradition.

“The fur trade heritage is something we should be very proud of,” Sopuck told DW, arguing that modern Canada was built on the trade in beaver pelts. “Anything we can do to protect and defend the fur trade, I support.”

Sopuck describes himself as a veteran of the “animal wars” against the anti-hunting lobby. He says the symbolism of retaining muskrat hats is enormous.

“The RCMP, by wearing muskrat hats, is showing solidarity with the communities they live in. It would be a very bad signal to the fur trade for the RCMP to abandon the muskrat hat.”

Not only that, but there’s just nothing like muskrat fur to keep the cold at bay, Sopuck says.

Labchuk disagrees. She says modern synthetics are warm, waterproof and cruelty free. She sees no logic to preserving “an archaic practice like fur trapping which causes a lot of suffering just because we have always done it.”

“I believe the future is fur-free,” Labchuk insists.

Recent polls in Canada and the UK suggest she may be right — with the public showing little appetite for fur. A recent survey suggested most Canadians were against killing animals for their pelts.

On the other hand, a major study by the University of Copenhagen found that following a dip during the 1990s when anti-fur activism peaked, the fur trade was on the rise again.

Still, most of that market growth is in Russia and China. In Canada, veteran furrier Klein has seen what appear to be irreversible changes in her trade.

During the 1960s, she recalls, it wasn’t unusual for a woman to own three or four mink coats, and no one gave much thought to where they came from or the animals that died to make them.

Things are very different now, Klein admits, though she says anti-fur sentiment is often misinformed. “The internet supplies all kinds of information and sometimes it is not exactly the truth.”

But better and better alternatives are also on offer​​​​​​. Klein makes fewer full-length mink coats these days, but is increasingly working with fake fur.

“Good quality fake fur is worth the same as real fur,” Klein says. “They have the same kind of class. You have to be trained to make the repair and work on real fur or fake fur. It’s the same.”

And who’s to argue with a woman whose hands have been working furs for the last five decades?