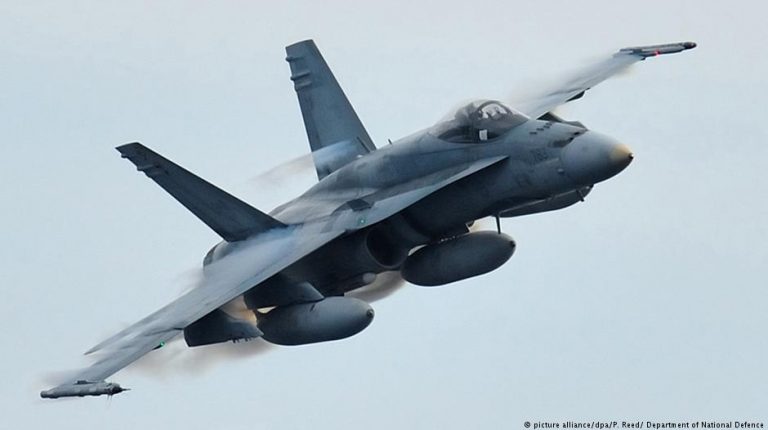 Amid a trade row with the US, Canada announces it is looking to buy 88 military jets. The news comes after the government said it would rather buy used fighter jets from Australia than new ones from Boeing.Canada launched a much anticipated process to replace its ageing fleet of CF-18 Hornet fighter jets Tuesday, announcing plans to purchase 88 advanced military aircraft to bring fresh wind to the Royal Canadian Air Force — for an estimated 15-19 billion Canadian dollars ($11.6-14.7 billion, €9.9-12.6 billion).

At the same time the government of Justin Trudeau also made it clear that Boeing had little chance of winning the large contract unless it dropped a trade challenge against Canadian plane maker Bombardier over its C-Series regional passenger jet, which resulted in a nearly 300-per-cent duty on the company’s newest passenger planes.

Procurement Minister Carla Qualtrough told reporters in Ottawa that the Liberal government wants to maximize the economic impact of the multi-billion dollar deal with bidders investing in the Canadian aerospace industry.

The evaluation of bids will also include an assessment of bidders’ impact on Canada’s economic interests, she said. “This new assessment is an incentive for bidders to contribute positively to Canada’s economy.”

It was only last week that the government scrapped prior plans to buy 18 Boeing jets as a stopgap measure while the country runs its competition for the 88 replacement jets. Instead Ottawa said it will now buy a second-hand fleet of 18 Australian F-18s, the same planes Canada already operates.

But the news of the purchase of used Australian Hornets set off laughter and sharp criticism of the government.

“Even the Australians can’t understand why we’re buying their old planes rather than doing what they’re doing, which is buying new planes,” Conservative leader Andrew Sheer said during question period in the House of Commons.

Both announcements mark a new low in relations between the Canadian government and Boeing and cast into doubt the future of defense cooperation with the American aerospace company already in place, which says it supports more than 17,500 jobs in Canada.