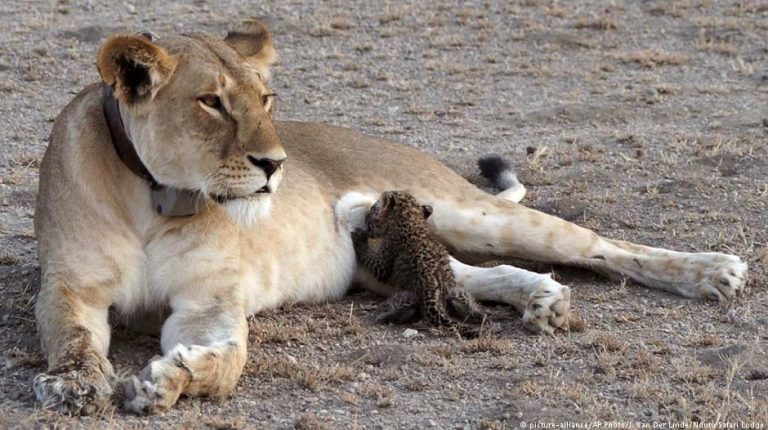 A lion has been photographed nursing a leopard cub in the first-ever known case of cross-species suckling among wild cats. The two species are normally mortal enemies.The photographs were taken at Tanzania’s Ngorongoro Conservation Area earlier this week and published by the wild cat conservation group Panthera.

The images show a five-year-old lioness named “Nosikitok” suckling a leopard cub estimated to be only three weeks old.

The organization said same-species adoption among wild cats has been known to occur, but cross-species suckling had never been observed before.

“This is a truly unique case,” said Panthera President and Chief Conservation Officer Luke Hunter. “I know of no other example of inter-species adoption or nursing like this among big cats in the wild.”

“Nosikitok” is radio-collared and monitored by KopeLion, a Tanzanian conservation NGO supported by Panthera that works with the local Maasai community to protect lions.

The lioness is known to have given birth to her own cubs recently, making her “physiologically primed” to care for cubs, according to Hunter. The leopard cub is believed to be the same age and a similar size to the lioness’s own cubs.

Hunter said “Nosikitok” would be “awash with a ferocious maternal drive” but it is still mystifying why she would suckle the cub of another species.

“It is quite possible she has lost her own cubs, and found the leopard cub in her bereaved state when she would be particularly vulnerable,” he said.

The photographs were taken on Tuesday and since then “Nosikitok” has returned to her pride. It is unknown what happened to the leopard cub.

Hunter said it is possible that the leopard’s mother picked up the cub from “lioness day care.”

However, he said that if the cub was not under the care of its mother its chances of survival were very low.

“The natural odds are stacked against this little fellow,” Hunter said, pointing out that 40 percent of lion cubs don’t make it to adulthood in the Ngorongoro Conservation Area.

“It is very unlikely that the lioness’s pride will accept it,” he said. “Lions have very rich, complicated social relationships in which they recognize individuals – by sight and by roars – and so they are very well equipped to distinguish their cubs from others. If the rest of the pride finds the cub, it is likely it would be killed.”

Hunter said that even if the leopard cub managed to survive with a lion pride until it became independent after 12 to 18 months, it would likely go out on its own.

“Even its early exposure to lion society would not override the millions of years of evolution that has equipped the leopard to be a supreme solitary hunter,” he said. “I am sure it would go its own way.”