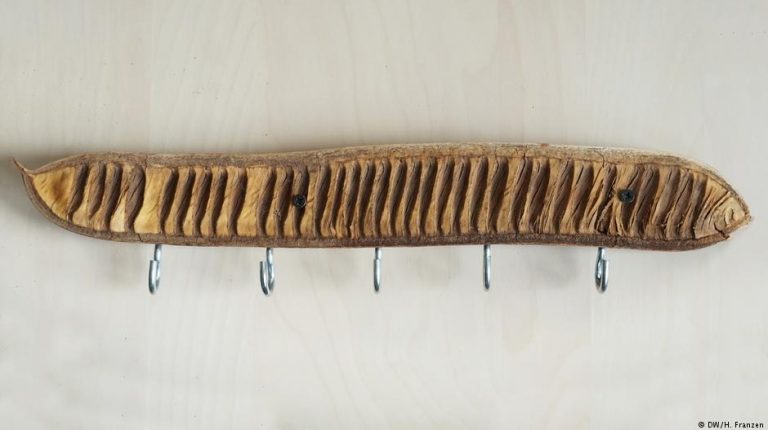 Most of our furniture comes from factories but some things really aren’t that difficult to make ourselves. I started with my own key board.Ever since we moved to our new home last year, more and more shelves and closets from a large Swedish furniture store (that I won’t name because I don’t have to) have found their way into our lives. Don’t get me wrong, I’m not one of those people who feels that every piece of furniture I own needs to be bespoke. As far as I’m concerned, a white closet can just be a white closet, it doesn’t have to be a fashion statement or a status symbol.

But when it came to organizing our keys, I drew the line. I may not be able to custom-build a closet, but I certainly felt that I could build a key board and I already had an idea for one, too.

During a recent family trip to Tenerife, I had come across a large empty seed pod, similar to a carob pod. They were ubiquitous where we were staying and clearly a nuisance to the street cleaners but I really liked their shape and structure. I wanted to use one in a decorative fashion, so I kept one until inspiration struck. Now it has.

So here is what I used:

1 seed pod (or any other object you want to display)

2 screws, 40mm long to fix the key hanger to the wall

2 screws, 15mm long to fix the seed pod to the pole

In a first step, I cut the wood to the right length so it would be completely hidden behind the seed pod. The pod wasn’t flat and I was concerned that it might break if I forcibly screwed it flat against the wood so I had to find the places where it would touch the wood naturally and place the screws there.

In a next step, I positioned the hooks, making sure they weren’t in the same place as the previous screws. Last but not least, I had to find two spots, ideally far apart, where I could put the screws that would fix the key hanger to the wall.

Overall, constructing the key board isn’t rocket science – which suits me just fine. But since I had to use a rather small piece of wood as my base and some of the screws would eventually go into the wood from different directions, it was important to plan ahead a bit.

Once I knew where everything went, I started drilling. First were the holes for the wall screws, which went all the way through the beam. Then I drilled two small holes through the seed pod for those screws. For the other parts, I only drilled shallow holes, the screws themselves would do the rest. And since we live in a house made of brick, I needed to drill holes in the wall and stick in the screw anchors.

All that is left now is the assembly.

First, you screw in the key hooks. That doesn’t require any tools and if you have pre-drilled the holes a bit, you can comfortably do it by hand. Since my wooden beam was very small compared to the hooks, I angled the hooks slightly forward to avoid them hitting the wall. If you do the same, you should definitely pre-drill your holes or you will keep slipping off the wood as you try to drive in the hook. In terms of the holes: Make sure they aren’t too deep or wide to assure that the hooks will fit tightly.

Next, you stick the wall screws through the wood and then screw them into the screw anchors. You now have a fully-functional key hanger – except that it’s not very pretty.

So in a last step, you attach the seed pod (or whatever you used instead), using the two small screws. You could nail it on as well but then you’d risk damaging the seed pod and you wouldn’t be able to take the key board down again without damaging it in the process.

Et voilà! That’s my very own, personal and unique key board. Now go make your own and adorn it with something that brings back fond memories for you.