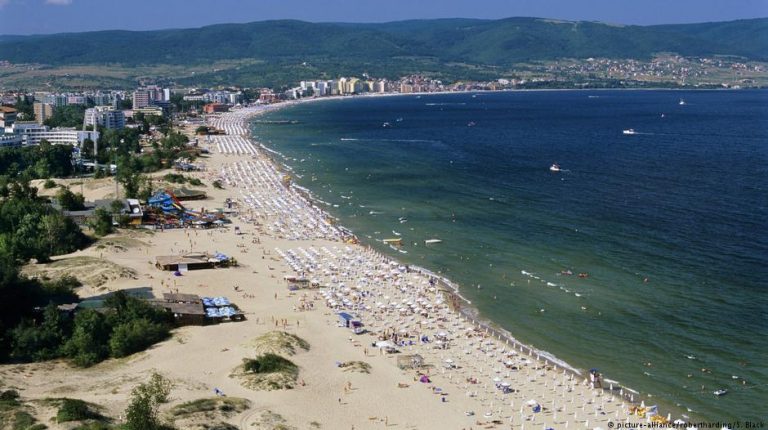 Attractive beaches, booked-out hotels, endless parties: tourism is booming in Bulgaria. Vacationers feel safe. The tourism industry is hoping for an exceptional season.Receptionist Anita has her hands full. An English tour group has barely finished checking into the fashionable hotel on Bulgaria’s Black Sea coast, when the next coach carrying holidaymakers arrives. Anita is pleased. “The hotel is filled to capacity,” Anita says, very pleased indeed.

In the resort of Slanchev Bryag, known internationally as Sunny Beach, tourism is booming. Because of the risk of terrorism in travel destinations such as Turkey and Egypt, Bulgaria has established itself as an alternative option. Regular customers value the cost-effectiveness of its package holidays and its beaches with their fine sand. In the parliament in Sofia, Minister of Tourism Nikolina Angelkova emphasizes that “Bulgaria’s tourist resorts are safe and desirable travel destinations. The regional chief of police, Zhivko Daskalov, has praised the successful cooperation of security forces with the hotels in helping to ward off terrorist acts. “That includes guarding beaches and training hotel personnel,” he says.

Hoteliers and innkeepers, ice cream and ticket vendors all hope for a super summer. Angelkova is optimistic. She expects 10 percent more tourists than in the record-breaking year of 2016. With 8.2 million holidaymakers from abroad, 2016 was the best year for Bulgarian tourism since the collapse of communism in 1989.

A good 10 percent of vacationers last year came from Germany – nearly 15 percent more than in 2015. This year, the number of early bookings from Germany alone is said to have risen by 29 percent.

For 2017, the Institute for Analysis and Assessment of Tourism in Sofia anticipates 11 percent more holidaymakers than last year. Bulgaria’s greatest competitors are its neighbors Greece and Turkey.

The best-known seaside resorts – Slanchev Bryag in the south and Zlatni Pyasatsi (Golden Sands) in the north – were developed 60 years ago along the longest sandy beaches on the Black Sea coast. Nowadays there’s no trace of the monotonous communist state-run tourism of the past.

With the transition to a market economy, new hotels sprang up everywhere. The old complexes were privatized and thoroughly modernized. They were joined by new holiday resorts, parks, water parks and discos. Now it’s not just the energetic receptionist Anita whose credo is “the customer is always right.”

However, Bulgarian tourism has one big problem: a staff shortage. “I’m new and I know nothing,” an employee at a centrally-located travel agency in Slanchev Bryag freely admits. Signs saying “Employees wanted” hang, for instance, on an outdoor barbecue and the garden wall of an Indian restaurant.

Because of the low wages in the poorest European Union member state, receptions, chambermaids, cooks, waiters and lifeguards have for years been moving to countries such as Greece, Italy and Malta, where they can earn much more. Now it’s hoped that thousands of workers from non-EU countries such as Ukraine and Moldova will fill the gap.

On June 1, the government in Sofia relaxed the regulations for employing those workers, because tourism is an important factor in the country’s development. The industry contributes about 13 percent to its economic output. In the record-breaking year 2016, revenues officially stood at 3.15 billion euros, 15 percent above the level during the previous year. The actual revenues would have been considerably higher, however, because the shadow economy in this sector, as in others, doesn’t appear in official statistics.

Speaking on state television, Valeri Simeonov, the deputy prime minister in charge of tourism, described the potential of Bulgaria’s tourism sector as huge. Nikolina Angelkova, the tourism minister, envisions new ambitious goals for the future: to use Bulgaria’s rich cultural heritage and fine wines to make the country a year-round destination for discerning tourists.