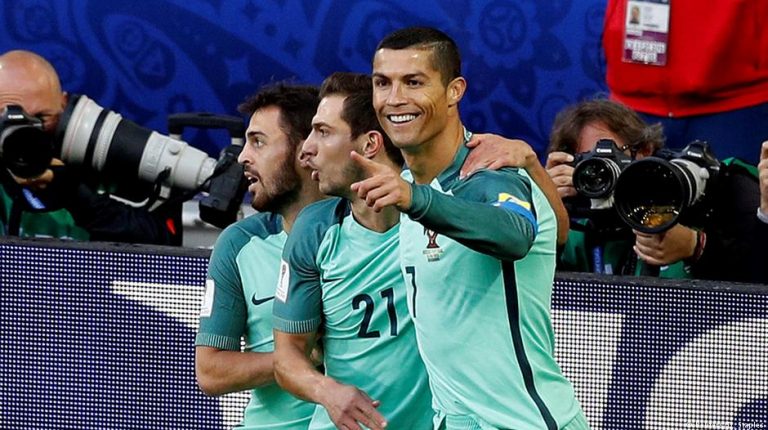 Portugal took the lead in Group A on Wednesday evening in Moscow thanks to a goal from 32-year-old Cristiano Ronaldo. The match may have proved a welcome distraction for the four-time world player of the year, who’s being investigated in Spain for possible tax fraud.

Ronaldo rose to meet a cross from the left from Borussia Dortmund’s Raphael Guerreiro, heading the ball back across veteran Russian keeper Igor Akinfeev. For Akinfeev, his 100th international appearance would not end in a win.

Akinfeev did come to Russia’s rescue soon after the break, denying Adrien Silva’s short-range header. Ronaldo had other chances in the second period, including a header stopped by Akinfeev and a shot he blasted over the Russian bar.

Portugal move in front of Russia in the group, with 4 points from their pair of group games.

In a potential blow for Dortmund, Guerreiro was stretchered off in the second period.

“Raphael was just taken to the hospital,” Portugal coach Fernando Santos said after the game. “We suspect a possible ankle fracture.”

Mexico launched a second-half comeback to survive a serious scare against New Zealand. Tensions frayed in the game, which ended in an on-pitch brawl requiring a 5-minute review by the video assistant referee, but resulting only in yellow cards for three of the ringleaders.

The root of the animosity lay in the first half. Chris Wood took a shot at goal while Mexican defender Carlos Salcedo was on the ground injured, following a tangle with Wood. Mexico’s coach Juan Carlos Osorio took particular exception to this, berating Wood himself from the dugout.

The New Zealand and Leeds United striker proceeded to put his side in front shortly before the break, and could have doubled his tally before half time.

With Javier Hernandez on the bench, Raul Jimenez, Oribe Peralta and Juergen Damm led the line for El Tri.

Jimenez and Peralta both found the net as Mexico turned the tie and held their narrow lead.

Wednesday’s games put Mexico and Portugal in the driver’s seat in the Group A battle to reach the semifinals. Both sides have 4 points after two games, and both would be guaranteed to progress with just a draw in their final group stage match. Mexico will face hosts Russia (on 3 points), while Portugal are yet to take on New Zealand,who are mathematically eliminated after the defeat to Mexico.